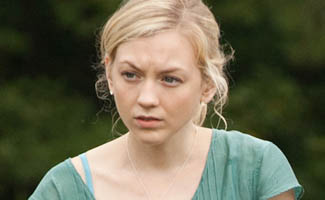 Nebraska native Emily Kinney, who plays Beth Greene on AMC’s The Walking Dead, explains why her home state would be the ideal place to ride out the apocalypse and describes what it’s like to see a walker chatting on a cell phone.

Q: You’re a musician in addition to being an actress. Steven Yeun plays guitar. Did you two ever jam on set?

A: We had a guitar on set and when we were just sitting around we’d sing a little. Steven always wanted to sing harmony! One of the first nights I played for everyone was the Fourth of July. Steven and Lauren [Cohan] and a bunch of us went to go watch fireworks in the pouring rain and we decided to go inside and he had a guitar. After that I did kind of start playing for people.

Q: You grew up in Nebraska, and in the Midseason Premiere Dave says “there’s a reason it’s called a flyover state.” How did you react to the dig?

A: I thought that was funny because I’ve heard people say that before! I live in New York City now, but my parents love living in small towns. They love the lifestyle, getting to know their neighbors and being close to family. And I have had friends who are like, “Why would anybody move away from Nebraska?” But there is nothing to do there.

Q: Would you rather ride out the apocalypse in New York City or Nebraska?

A: I want to say Nebraska — it’d be like Hershel’s farm. I did grow up in a place that was really close to what Hershel’s farm is like, in this little town called North Bend, Nebraska. It’s surrounded by farmland with a little over 1,000 people. But then there’s something about New York and New Yorkers, who are tough and know how to do what they have to do. So I feel having some New York friends would be a good thing too.

Q: You’re one of the younger actresses on set. Did you get any wisdom from the veterans?

A: I don’t know if they specifically gave me advice, but you can’t help but talk to them about the difficulties they’ve had. I also feel like I learned a lot from just watching how they did their scenes. When we arrived on set, right away it felt like we were sort of Scott Wilson’s daughters. He invited us to dinner and loved telling stories about other movies he was in.

Q: On the show you play Maggie’s little sister. How did your relationship with Lauren Cohan compare?

A: I’m the middle child and I have a really great older sister. I definitely related to that dynamic. Lauren and I became like that on set: We’d talk about boys and clothes and hang out.

Q: Did you find that the walkers were any different in person than how they seemed as a viewer?

A: It was pretty funny to have a break and see zombies on their cell phones or smoking a cigarette — doing normal things. And then you’d see them on set, like oh, the zombie that is stuck in the mud is the guy that I was just talking to about their kids in the van!

Q: Would you say you were relieved or upset that you didn’t get to kill a walker this season?

A: At first I was just so happy to have survived myself. But now watching the show, I have to kill a zombie! I feel like it will make me a stronger character. I don’t know if I will, but I’m hoping!