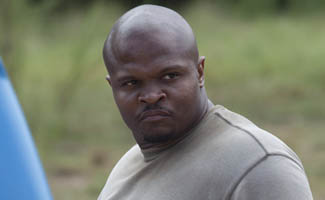 IronE Singleton (a.k.a. T-Dog on AMC’s The Walking Dead) talks about some challenging moments on set this season and explains which character he’d most like to see again.

Q: How is Season 2 different from Season 1 for you?

A: The first thing that comes to mind is our camaraderie. First season, a lot of it took place in town, obviously, and the cast was a bit segregated between those in town and those at the camp. Everybody is there together this season and that right there has brought us a lot closer as a group.

Q: Is there anything you miss about the “town” group?

A: Merle… If Merle returns… that would make for some epic stuff — some serious drama I think people would be talking about for a long time.

Q: What was the most challenging thing you had to do this season?

A: The show is so physically demanding. I would have to say the scene we did with the well walker. We had to catch the water pump from falling in the well — we had to do that so many times. And I was on my backside and I had to kick and claw. The water pump was fake — but it was quite demanding and really tough because we did it over and over again. By the end of the day, I was exhausted — it was scorching hot too.

Q: I understand you do a lot of charity work in Atlanta.

A: As much as I can, though not quite as much these days because I’ve been staying so busy. But normally, it’s my relatives. My lineage is out of poverty. A lot of my relatives — cousins, nieces and nephews — are in that situation. There’s so much depression and poverty within my own family, so I spend a lot of my time with them.

A: It seems like everybody in my family wants to act now! A lot of friends and family and associates have been coming to me. About T-Dog, they give me some criticism — some may be a little harsh, like “Yeah you look a little fat on screen!” [Laughs]. But I have a 14-year-old, an 11-year-old and an 8-year-old, and none of them are allowed to watch. We gave my 14-year-old the opportunity and she said no.

Q: I read an article that said you were most famous for your role in The Blind Side. Has that changed since you’ve been on The Walking Dead?

A: Oh yeah. Now I’m getting more people that recognize me for The Walking Dead. The cat is out the bag — what can I say?

Q: This season we found out T-Dog is short for Theodore Douglas. Do you have any other nicknames besides IronE?

A: My wife calls me Rob, or Sing-y. I had a name when I was five or six, my mom called me “Ton.” I call my son that now. It reminds me of my days when I still had my innocence. I was four or five and I hadn’t really been exposed to a lot. After that a lot of my innocence was stripped away, but I’ll never forget that that was the most innocent stage in my life.

Click here to read an interview with Michael Rooker, who plays Merle Dixon.