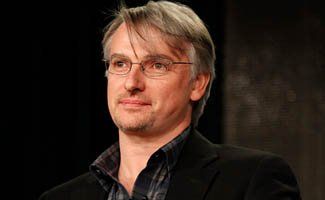 In Part II of Glen Mazzara‘s interview based on fan questions, The Walking Dead show runner explains Lori’s reaction to Rick’s confession and hints at what lies ahead in Season 3. (Click here to read Part I of the Mazzara interview.)

What do you think would be different about Daryl if Merle hadn’t gotten separated from the group in Season 1? –Diogomes

Why is everyone mad about Rick killing Shane? Lori seems really pissed about the situation. Does she love Shane? –thadude

A: The group is upset with Rick in general for keeping Jenner’s secret and killing one of their own. Murder in a small-knit group is not to be taken lightly, so of course they would be upset. And Lori loves Rick, and she has recently realized that she does indeed love Shane. She almost said so in “Better Angels.” She decides to take action by talking to Rick, so when Lori is horrified by Rick’s confession, yes, she is upset a man she loved was killed but more importantly, that man was killed by another man she loves and she was a catalyst… She is horrified by her own culpability and is projecting that self-hatred onto Rick.

It seems like every time a human kills another human on the show, their moral compass shifts to a really dark area. In Rick’s case, is his ‘Ricktatorship’ detrimental to the group’s survival? –DGWalking

A: That remains to be seen. I think Rick feels he has proven himself as a leader and has had to sacrifice more than anyone else to earn his place in this group, and he’s also racked with guilt over his own murder of Shane. So I guarantee this emotional storm will not be a good thing for this group. We actually thought of an alternate ending [to Season 2] where they were on the road and attacked by zombies and fled toward the prison and found the prison that way. Given the extent of the mayhem already in the episode, we decided to end the Finale on a more character-based beat. We thought about the story we were telling, and decided that if Rick was the central protagonist of Season 2, it was really important to end on an internal change in that character

Now that Shane and Dale are dead, who will fill in the places as bad A-hole and the voice of reason? –Kivana-Rashad

A: That remains to be seen. The fact that they are no longer on the farm and they’re on the road — the entire landscape is inhabited by walkers and there’s no safe place to go — everybody’s role needs to be redefined.

VIDEO: The Cast Looks Ahead to Season 3

Does your vision for Season 3 more resemble the “trapped in a box” feel of Season 2 or the open movement of Season 1? – Grish

A; Moving ahead to Season 3 we’re excited to be getting to the meat of Robert Kirkman’s comic book. The world opens up, it’s no longer claustrophobic, it’s out on the road. I think what we’ve done until now has been very exciting and fun, but I feel it’s been prolonged and I feel like just now we’re getting to the heart of the matter.

The storyline with Randall was great, as it showed how afraid the group is to have ANY human interaction anymore. Is this an area to be explored perhaps in Season 3? –Grant Jacobs

A: Without a doubt. As I’ve said, we’re going to open up the world in Season 3, introduce new characters from the comic books, introduce characters that aren’t in the comic books, and really explore what happens when our little band has to hold their own against many, many other forces. So the horror is not the walkers but the many different groups.

Can you tell us anything that you have in store for us fans about The Governor’s character for Season 3? –FolkDeath82

A: He is a bad-ass, just as in the comic book. He scares me.

Is there an end in sight to this show or do you foresee an indefinite run? —BklynChik

A: You know, ask me that after Season 7. Because I think we can go to 7 Seasons at least.

IS THERE HOPE?? –David Griffith

A: Yes, there’s hope as long as we have characters that we care about and care about each other.

What is up with the helicopter? –Erica Lawler

A: Let’s just say that it’s not the last we’ve seen of it. There’s a story behind that helicopter.

I wanna know who out of the group is your favorite character and why? —WalkingDeadFan247

With which character do you identify yourself the most? –lauriss86

A: Being a show runner, I certainly have an affinity for Rick. I sympathize with him having a lot of critics and a lot of people telling him what he should be doing. Everybody is second-guessing the poor guy and he’s trying to do his best.

Can I say something to the fans?

A: I’d just like to say on behalf of all the cast, crew, producers and writers at The Walking Dead — just thank you. You know they have been incredible and so supportive and patient and really caring about what we do and it really does make this the best job in the world. To be able to tell a story that we’re excited about and then to get this level of feedback from such passionate fans is really exciting. It’s something that we really do appreciate and it is really meaningful to us, and I’d really like to thank the fans.