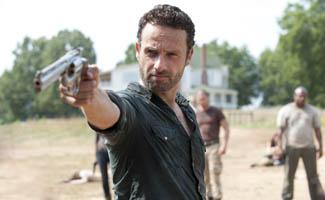 The American Cinema Editors society today announced their nominees for the 62nd Annual ACE Eddie awards honoring excellence in film and television editing, and The Walking Dead editor Hunter Via has been honored with a nod in the Best Edited One-Hour Series for Commercial Television category.

Via — who won the award last year for his work on The Walking Dead‘s Pilot and was this year nominated for his work on Season 2 Episode 7, “Save the Last One” — will face stiff competition for the award: Friday Night Lights‘s Angela M. Catanzaro; The Good Wife‘s Hibah Frisina; and Kelley Dixon and Skip MacDonald from AMC’s own Breaking Bad are also nominated.

The awards will be presented during a ceremony on Feb. 18 at the Beverly Hilton in Los Angeles.

Click here to read an interview with The Walking Dead Editor Hunter Via for Season 1.