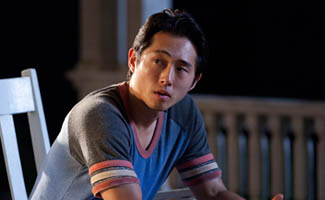 Steven Yeun, who plays Glenn on AMC’s The Walking Dead, explains the trouble with keeping secrets then dishes on his first on-screen sex scene...in this series at least.

Q: How has Season 2 been different from the first for you?

A: I think there was a learning curve. We kind of had the pressure trying to recreate the chemistry that everyone had from the very beginning, but we figured it out. And once we figured it out, we fell right back into our groove.

Q: You spent some time at the legendary Second City in Chicago. How has your experience at the comedy club helped you on The Walking Dead?

A: If anything it’s the improv training that’s helped. It’s nice to take a step back from a script and think about how you would say something personally — and then apply that. What’s cool about the show is that it stretches me in ways that I wasn’t stretched at Second City. On the show you kind of have to kill jokes. You can’t play them too big or it breaks the reality of the situation. So they’ll write a joke in the script, but you have to just drop it and put it on the ground and say it as realistically as possible.

Q: Do your former Second City cohorts approve of your move from comedy to horror?

A: If you work in Chicago in the improv scene, anyone is happy for you if you get a job. Doing anything. We’re barely scraping by!

Q: You stated once that your parents were upset when you told them you were not going to be a doctor or lawyer. Have they come around yet?

A: Oh absolutely. They’re now on full-throttle brag mode. They’re Korean parents, and they just wanted me to have a structured, safe life and when I told them I wanted to do this they were worried that I’d be struggling. This industry is up and down, but right now they don’t have to worry about me.

Q: Glenn has to get a “secret” product for Lori. Has anyone ever confided in you in a similar way? Are you good at keeping secrets?

A: People do confide in me! Those moments are terrifying because you have information and so much weight that doesn’t have anything to do with you. I’m good at keeping secrets, but if it’s not something super serious I usually tell people not to tell me because I’ll tell someone else.

Q: Glenn gets lucky! Were you as surprised as your character when you saw that in the script?

A: I knew it was coming, but I didn’t know how it was going to come. I remember we just improvised a lot of that scene. I wanted it to play as this crazy awkward situation, as it should be: This kid hasn’t had this happen to him and out of nowhere this girl is saying, “Let’s do it.” It should be a beautiful thing because it’s a sweet thing, but it’s also awkward and frightening. I hope that scene captured all those things.

Q: Was it your first love scene on camera?

A: No it wasn’t. But I don’t really mind if people don’t see the first one and count this as my first one.

Q: Tell me a little bit about the scene where they send Glenn into the well. Was that you lowered in there?

A: That day was crazy! It was a harness that they attached to a rope that was lowered down into a 25-foot actual well that they built. The harness couldn’t be thick and padded because it would show so they used belt straps right around my groin area and my waist. After the first hour I was like “This isn’t so bad.” And then we shot for twelve more hours. By the last take, I was so tired and they were like “You gotta flip out here!” That was a tough day, really earning your paycheck.

Q: Do you appreciate that Glenn always seems to get sent on the toughest missions?

A: I think it’s in his wheelhouse. There’s a common theme of: “We don’t know what to do, Glenn what do we do? Why don’t you do it?” Glenn’s not going to say no because I think he wants to be a martyr or hero. If he goes, he goes out in a blaze of glory; if he comes back then everybody loves him. But once romance happens you never know how you’re going to reassess your priorities.

Q: Glenn can’t play guitar, but we hear you can. Is it strange to pretend to pluck at an instrument you know so well?

A: Yeah man! In between takes I was playing it for real because I was like this is nonsense and I would purposely put it out of tune so I couldn’t play it right. All I want to do is play it and jam out and have fun with it, but it’s weird because I have to act like I can’t. Hopefully it came off like I didn’t play well instead of it being like cheesy remedial plucking.

Click here to read an interview with the actress whose character sends Glenn on a secret mission to the pharmacy, Sarah Wayne Callies (Lori Grimes).