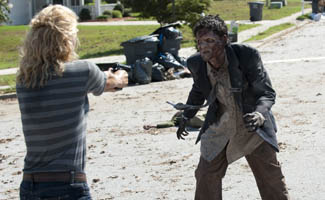 This week Entertainment Weekly points to The Walking Dead as a frontrunner in its roundup of Fall television while Robert Kirkman dishes on the last new episode of 2011.

• Entertainment Weekly includes The Walking Dead in its roundup of fall TV highlights: the “show ranks as cable’s top-rated drama among young adults.” (No Link.)

• Robert Kirkman previews the midseason finale in The Hollywood Reporter: “We’ve got Rick now aware of the affair, we’ve got a barn full of zombies living two feet away from our group, our group living on a farm where they’ve been told they’re not welcome to stay there for any amount of time.” He tells Entertainment Weekly, “Seeing Rick interact with Shane will have an extra level of tension.”

• The Hollywood Reporter interviews Laurie Holden, who talks about how Andrea “becomes more of a sharpshooter and is really trying to make amends for not necessarily having it all together.” She talks to TV Guide about Shane taking charge of Andrea’s transformation: “Shane and Andrea are in many ways cut from the same cloth.”

• GQ includes Zombie Auteurism in its list of stuff the High-Bro (when bro-culture goes highbrow) likes: “The Walking Dead gave the shuffling undead some TV prestige…” (No Link.)

• Daemon’s TV includes Norman Reedus as one of its must-see TV stars: “He has managed to transform this racist hillybilly character into someone loved and rooted for by the audience.”

• New Zealand’s Stuff counts The Walking Dead as one of the best sci-fi shows on right now, calling it “absolutely riveting.”

• The Los Angeles Times includes The Walking Dead wind-up zombie in its list of geeky holiday gifts: “Relax, Rick Grimes. This walking corpse is only a toy.”

• The Rochester Democrat and Chronicle suggests holiday gifts for the show’s fans, like a Walking Dead shooting target poster, to get them “ready to take on the undead in no time.” (No Link.)

• WorldScreen reports that Germany’s RTL2 TV channel has picked up The Walking Dead.

• Comic Vine recaps Season 2, Episode 6, “Secrets,” and also compares it with the plot of the graphic novel.