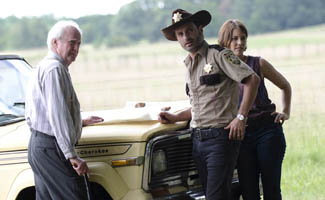 This week, TV Guide describes The Walking Dead as one of the best shows on television while Robert Kirkman chats with Entertainment Weekly, MTV and the AP.

• TV Guide calls The Walking Dead one “of the very best shows operating right now.” It also includes the show on its Hot List, noting, “What really gives this show a leg up… [is] the stories, which infuse horror with heart and brains.” (No Link.)

• Robert Kirkman talks to TV Guide about the possible return of Merle: “Getting to see Norman Reedus and Michael Rooker actually interacting and playing off each other is going to be an enormous treat.” Kirkman is also coy with TV Guide about what might be in Hershel’s barn.

• MTV discusses Glenn and Maggie’s romance with Robert Kirkman: “It brings a sense of hope into the show, that these two people can find each other and find love.”

• Entertainment Weekly and Robert Kirkman chat about Daryl’s Episode 4 scene with Carol in the RV: “Almost every actor in the cast showed up, because they absolutely loved that scene and they wanted to see Melissa and Norman’s portrayal of it as it unfolded.”

• The Associated Press talks to Robert Kirkman about his goal for The Walking Dead: “I wanted to follow survivors in that world and see what they do and where they go.”

• TV Guide raves about The Walking Dead‘s attention to detail: “Watching a bloated walker rip in two as the survivors attempted to remove him from their water supply was so perfectly gross that I think it will stand as one of my favorite kills of the series.”

• Multichannel News reports that The Walking Dead‘s Season 2 premiere was one of only two entertainment-based shows to break into the top 10 of October’s most-watched programs. (No Link.) according to the New York Times notes that Sunday’s The Walking Dead episode led all the other Sunday cable offerings, with a total audience of 6.3 million viewers.

• GQ rates each The Walking Dead character’s “likelihood of imminent zombification on a sliding scale of skulls,” with Shane near the top of the list.

• The Orlando Sentinel reports that The Walking Dead is nominated for a People’s Choice Award in the Favorite Sci-Fi/Fantasy Show category, up against Fox’s Fringe, the CW’s Supernatural and The Vampire Diaries and HBO’s True Blood. Go to the People’s Choice website to vote for the show by Dec. 6, when the polls close.

• The Orlando Sentinel summarizes The Walking Dead Season 2, Episode 4 as “another stunning episode. The zombie drama reveals its most horrifying creature to date. Yet there are unexpected moments of tenderness about fathers, sons, flowers and faith.”

• Hyphen magazine is pleased that in last week’s The Walking Dead “Glenn finally got his time to shine… getting featured in not one, but two major plot lines.”

• Shane abandoning Otis to the walkers was one of TV.com‘s highlights of the week: “This wasn’t in the comics! THIS WASN’T IN THE COMICS! And we LOVE the show for it.”

• ChicagoNow says The Walking Dead Season 2, Episode 3, “Save the Last One” was the best of the season so far, noting that Shane’s decision regarding Otis was “both a huge piece of character development and the sort of gut-wrenching, morally ambiguous situation necessary to keep the show compelling.”

• ReviewSTL.com thinks The Walking Dead is still “one of the best shows on T.V.”

• The Macon Telegraph still “genuinely” looks forward to watching The Walking Dead on Sundays, even as it drops several shows.

• The Hollywood Reporter points to The Walking Dead in its examination of whether TV series should get second chances, noting that the zombie drama went from being “a hit to an even bigger hit in Season 2.”

• Canada’s Ottawa Citizen cites The Walking Dead‘s popularity for the proliferation of zombies, which seemingly represent “many of the anxieties Americans feel about national life today, and about where it’s going.” IFC also takes a look at the zombie phenomenon.

• Zap2it talks to Steven Yeun about Glenn’s scene with Maggie in the pharmacy: “It was more like how can we make this the most awkward, uncomfortable, yet hopeful and kind of a beautiful thing in the midst of all this chaos?”

• TheInsider.com shares five things about Sarah Wayne Callies that you might not know, including the fact that she grew up in Hawaii.

• The Newnan, Ga. Times-Herald interviews local boy, James Allen McCune, who plays Jimmy. He calls the experience “the biggest career jump of my entire life.” Meanwhile, macon.com profiles one of its locals, Michael Koske, who has played a zombie extra in three episodes.