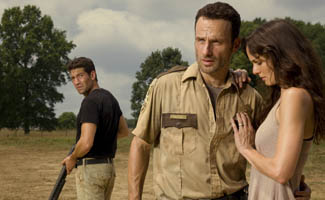 This week the nominees were announced for the 2012 People’s Choice Awards, and The Walking Dead was honored with a nomination in the Favorite Sci-Fi/Fantasy Show category.

AMC’s hit series faces stiff competition for the award: Fox’s Fringe, the CW’s Supernatural and The Vampire Diaries and HBO’s True Blood are also in the running. Happily, it’s up to you the viewer to make sure your favorite series walks home the winner.

Log on to the People’s Choice website between now and Tue., Dec. 6 at 11:59 PM | 10:59C, and vote for The Walking Dead as often as you like. Then tune in to the ceremony Wed., Jan. 11 on CBS to see if zombies truly have a hold on the hearts (and brains) of TV watchers everywhere.