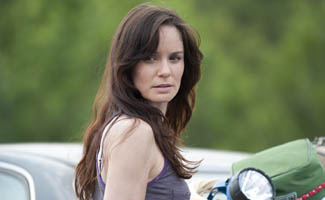 Sarah Wayne Callies, who plays Lori Grimes on The Walking Dead, takes a moment from the set to talk about finally getting her hands bloody in Season 2, and to share some pre- and post-apocalyptic beauty tips.

Q: Tell me one thing that was totally different for you on set this season than last?

A: Location and comfort. We’re filming the bulk of this season on the farm, which is just so beautiful. You’re telling this really gruesome, heart-wrenching story in this magnificent pastoral setting. I get to work a little early and I just throw on my iPod and walk through these amazing fields, watching the sun rise over the trees.

Q: How weird was it to film the scenes this season that flash back to before the apocalypse?

A: It’s very different; I wear a dress in one of them and my hair is up and I’m wearing flip-flops and I’m carrying a Blackberry and I’ve got lipstick on. Most of the crew walked by me on the way to set without saying hello, because they didn’t recognize me!

Q: You do get some post-apocalypse make-up though, right?

A: They put the dirt and the blood on us, because it’s got to match day to day. And there are days that they put dark circles under your eyes if you’ve gotten too much sleep the night before.

Q: Before The Walking Dead premiered you’d never seen a horror movie and never read a comic book. Has that changed from being on the show?

A: You know I tried, and I figured I’d start with Zombieland because I think: Woody Harrelson. It’s a comedy. But I only got about 17 minutes in it before I freaked out. I had to turn it off and turn on all the lights in the house and have my husband speak soothingly to me. I just can’t handle that stuff!

Q: One of the show’s many flash points is the tension between Lori, Rick and Shane. What’s the chemistry like between you, Andrew Lincoln and Jon Bernthal on set?

A: I adore those two. They are categorically different men but they’ve got an amazing bond. For two young, attractive alpha-male type guys to work so closely together and so unselfishly and with such professionalism — that’s kind of unheard of. It’s family: When Jon’s wife went into labor and he left town he left me his pit bulls.

Q: Last season your character did not get a chance to kill a zombie.

A: Not one all bloody season!

Q: Do you feel a little bit left out of the zombie-killing fun?

A: Well there will be blood on my hands by the end of the season, that’s for sure. They wrote me a couple of really awesome scenes this year that were so much fun to film.

Q: Talk to me about the horseback ride you take in Episode 2. Are you much of an equestrian?

A: I do ride, and I went up and spent a day with the horse about a week before we shot that. Riding at a full gallop without a saddle is hard enough. The problem is you have to be really careful how you grip with your legs — otherwise you kick the horse’s boy parts — and I didn’t trust that I wouldn’t end up kicking him where he didn’t need to be kicked, so in the end we had a stunt rider do it. She owns the horse, and she actually looks more like me than I do: I would see her dressed up like Lori Grimes across the set and I’d have to do a double take.

Q: You grew up in Honolulu. Do you think Hawaii would make a good place to avoid zombies?

A: Right now, Hawaii is not the most well-situated as far as its ability to provide food for the population. The statistics are really alarming: There’s only something like three days worth of food on the island at any given time. But if you were on one of the less populated islands, it might be pretty safe — unless zombies can swim of course.

A: That could be the spin-off! Hawaii Five-O meets The Walking Dead.