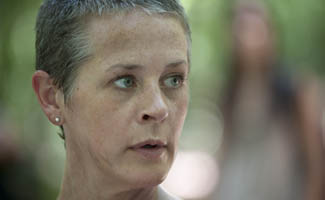 Melissa McBride, who plays Carol on The Walking Dead, describes how playing her character is like witnessing a car wreck and imagines the kind of zombie-killing arsenal that would suit her.

Q: What was your reaction when they told you that Sophia would disappear this season?

A: I was shocked! It’s been a thrill to play it out. And I’m anxious to see what happens when this gets resolved.

Q: How do you keep yourself level-headed on set when going through so many emotional swings?

A: Well it can certainly wear on my emotions a bit, but I have a strategy to just be able to let it go and breathe it out. Playing Carol is almost like witnessing a car wreck. It didn’t happen to you but you still have the sense of having witnessed this kind of terrible thing. As the day wears on, it kind of wears off a little. I also really love this part — I have a great interest in psychology and I enjoy trying to figure out what happens with Carol to elicit her reactions to things.

Q: What’s the most interesting part about playing Carol?

A: What’s interesting now is her daughter has gone missing and this is her whole life, but also she’s experiencing guilt about the search for this daughter that is bringing this group of people into some really horrifying circumstances that who knows if they would have gotten into had this not happened.

Q: Has it made you self-conscious about the way you interact with people in your life?

A: When people help me out, even with something like a move or a ride to the airport, I’m always thinking “Are you sure it’s ok? Are you sure you don’t mind?” Along those terms, it is incredible what the characters of The Walking Dead are doing. I don’t think Carol can’t help thinking if it hadn’t been for her and her daughter, the group wouldn’t be in this situation.

Q: You used to work as a casting director. What do you think the secret to good casting on a show like The Walking Dead is?

A: The actors themselves have to have something that’s innate within them, something very instinctive.

Q: Can you size up the cast of the actors on the show?

A: To be quite honest, these characters are perfectly cast with the
actors on the show. It’s such a talented cast and it’s enjoyable to see
people matched up so well.

Q: Have you ever petitioned the producers or the writers for more scenes with good news for Carol?

A: Is there good news in the apocalypse? [Laughs] I don’t know if that’s possible!

Q: Carol doesn’t ever have a weapon and has not yet killed a zombie this season. Are you eager to get a part of the zombie killing action?

A: I kind of do! I was talking one of the producers the other day and she said she was walking through the farmhouse and she found a little basket with some knitting needles in there. Wouldn’t that be kind of cool for Carol? A couple of knitting needles through some zombie’s head, a little slip-stitch. [Laughs] Carol should have a tool belt with knitting needles and an iron skillet — we’ve got to get her a weapon!

Click here to read an interview with the actress who plays the other strong mom on The Walking Dead, Sarah Wayne Callies (Lori Grimes).