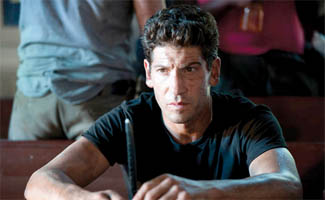 The actor who plays Shane Walsh, Jon Bernthal, describes the various mannerisms that make Shane unique and dishes on which survivor he would most want by his side in the event of a zombie apocalypse.

Q: I didn’t think this was possible, but the walkers have gotten even more terrifying this year.

A: Greg Nicotero is the best in the business, we all know that. Last year he blew all of our minds by turning gruesome vulgarity into beautiful art. What I’m seeing this season is that there’s a specificity with each zombie. You can actually tell who they were before they got infected and how they got infected and where they were bit. I think that’s really what we’re trying to do with the show: nothing is taken for granted.

A: Yeah, I do. And I hate zombies. Call me a silly method actor but you spend all day hunting them and killing them and running from them and there you go. I love the people that create them and the people that play them, but the zombies themselves I hate. When I go to a publicity event and there’s some guy paid to be a zombie for the night and they walk up to me, my first instinct is to take their heads off.

Q: Shane always gets to tote the big guns. Do you enjoy acting with a gun on set? Are you gun person?

A: You know I do love Shane’s shotgun. In real life I kind of have a shotgun similar to it, but I’m not a huge gun guy. Only thing about Shane’s gun is it’s super loud and attracts other zombies. We shoot blanks on set and there’s still a good kickback.

Q: Shane and Rick have a love-hate relationship. Do you have a lifelong friend like that?

A: Man I think a lot of people have that relationship with me!

Q: Have you enjoyed playing a character with a dark side this season?

A: I think that Shane really has figured out that in this world it’s all about making hard decisions. If you have a group of people and you’re trying to survive what do you do if one person is holding you back? Do you get rid of that person? Or do you do the “right thing” and keep that person alive? I think Shane has discovered this new world order; he discovered it in Season 1 when he beat Ed up down by the water in Season 1 or when he trained the gun on Rick. Things like guilt and shame — are those valuable emotions in this world, or do they actually have no place in them? I love those themes of the show.

Q: Shane is the only character with a sex scene thus far. Do you give Andrew Lincoln a hard time because of it?

A: I never have, but now that you said that I’ll be sure to do it today.

Q: You used to play high school football — and we hear you get to be back on a football field this year for an upcoming episode. What was it like?

A: It’s great, that was down at Newton High and they have a really good team. I grew up in Washington DC and while high school football is important there, down here it’s huge. It’s like religion, the teams are serious! One of the things I really wanted to do this season was go to a game.

Q: What’s the biggest prank you ever pulled in high school?

A: Man ours were pretty vulgar, I don’t know if I want to talk about our pranks. The first thing I thought of I definitely can’t say.

Q: Shane has a very distinctive walk. He also rubs his head a lot. Are those Shane or Jon gestures?

A: No man, I hope that what I’m doing is Shane. I’ve tried to find mannerisms for him, especially this season. He has things he does when he gets nervous or agitated. Shane is constantly boiling and constantly at war with himself, and I think that these gestures and movements come out of what’s going on inside of him.

Q: If you had to be stuck with only one of the characters from the show in a zombie apocalypse who would it be and why?

A: Daryl Dixon. I think Shane kind of figures that out this season as well. I think he’s an enormously valuable member of the group. He can do things and he’s down to do things that a lot of the other members aren’t.

Q: Do you personally feel like you’re better prepared for a zombie attack now?

A: Yeah I do, because I think there’s definitely some things I know now that I didn’t know then. But I gotta tell you, when you really let your mind go there and you think about the ins and outs of what would go down, I think we’d really all be screwed.

Click here to read an interview with The Walking Dead‘s show-runner, Glen Mazzara.