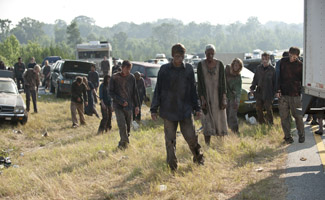 AMC’s critically acclaimed original series, The Walking Dead, is back with its much anticipated second 13 episode season. Kicking-off a two week long AMC Fearfest, the network, once again, presents viewers with a 90-minute premiere episode, airing at 9PM ET on Sun., Oct. 16, with six one-hour episodes in the weeks following. The final six episodes of the season commences on Sun., Feb. 12 at 9PM ET. The 90 minute version is also scheduled to be launched globally on all Fox International Channels, following the US premiere the week of Oct. 17-23. Season two reaches FOX audiences in 122 countries, speaking 35 languages and is seen by over 200 million households globally.