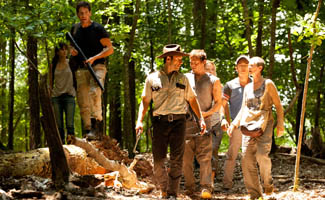 This week the Daily Mail chats up Andrew Lincoln about Season 2 while several publications like BuddyTV, The Hollywood Reporter and /film weigh in on Talking Dead.

• BuddyTV discusses AMC’s upcoming Talking Dead after-show: “We’ll definitely need that post-show half hour to make sense of it all — and catch our breath.” The Wrap asks, “The Real Housewives have their own live after-show, so why shouldn’t the zombies of The Walking Dead?” /film thinks Talking Dead “could be a great move.” Boomtron thinks it’s “a fun concept that could create some good conversations.” The Hollywood Reporter, Deadline and C21 Media also cover the news.

• The Detroit News catches up with Steven Yeun, who says of Season 1, “I wasn’t completely shocked (by the ratings). There was really good buzz on the set, and people were doing pretty good work.”

• This month’s issue of Champion! Magazine (an iPad-only publication) features a cover story on The Walking Dead hailing Season 2 as “even more disgusting” than Season 1. Click here to learn about the free app.

• Glen Mazarra and The Walking Dead cast members talk Season 2 with Entertainment Weekly. Says Jon Bernthal, “nothing was going to slow us down or keep our eyes off the prize.” Dread Central posts the photos from the EW article.

• The Hollywood Reporter has a gallery of photos from The Walking Dead Season 2 premiere.

• FEARnet and Dread Central feature a new The Walking Dead video of the cast and crew discussing Season 2. CinemaBlend likes “what Laurie Holden says about her character Andrea and where her head is at.”

• CosmicBookNews reports that the tickets for next month’s New York Comic Con feature a photo from The Walking Dead.