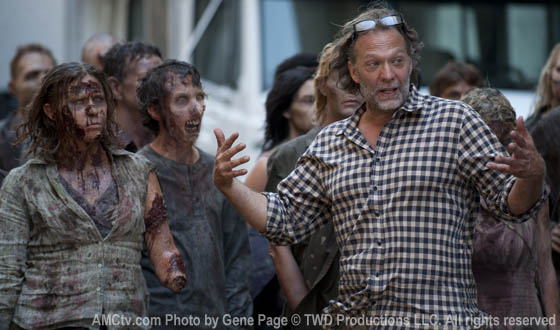 Consulting Producer and Special Makeup FX Artist Greg Nicotero discusses the dos and don’ts of making zombies, creating webisodes for online, and how The Walking Dead reminds him of Christmas. New Dispatches From the Set are released every week throughout the production.

Q: Congratulations on your Emmy nomination. What do you think made The Walking Dead stand out?

A: Thank you! I think we were able to push prosthetics into a place that we hadn’t seen on TV before, in terms of the caliber of design and sculpture. There’s nothing television about The Walking Dead. Last year we shot six mini-movies, and they just happened to play on television. And what I thought the most successful aspect of it was, people couldn’t figure out exactly how we did it. Take Bicycle Girl. There were people who thought she was an animatronic puppet. There were people who thought we dug a hole in the grass. No one could really put their finger on how it was done. And as far as I’m concerned, that’s what I want to feel when I see a movie.

Q: Have you created any signature zombies for Season 2 akin to Bicycle Girl?

A: If I tell you about it, it gives the gag away! But I will say one of the signature zombies we did for this season took us five weeks to build and is the most elaborate thing we did on the show. And we were working on it up to an hour before we were shooting it on-set. But there’s a lot more to do this season in regards to the way the story propels itself forward. There’s one thing that’s really interesting that they’ve established, which is this herd mentality — the idea that they travel in these big packs and that there could be hundreds and hundreds of walkers in these herds. The first episode we come upon one of these herds and it’s just terrifying.

Q: How has the makeup evolved from Season 1 to Season 2?

A: We really only had six episodes to get our feet wet last year. So when we wrapped Season 1, I made a list of dos and don’ts for the zombie world in terms of things I wanted to change for next year to make the makeups hold up better and to make them feel fresh and original. We sculpted a whole bunch of new zombie prosthetic pieces, we made new contact lenses. We sort of upgraded everything that we had from last year.

Q: What kinds of dos and don’t did you come up with?

A: Here’s a perfect example: There’s a fine line between gluing a wound on someone’s cheek and making them look like they’re decomposing. So the first thing that we did is I had our sculptors create some prosthetic pieces that would go over the brow and onto the cheekbones. So it would make the eyes look a little more sunken in and make the bone structure look more pronounced — we’ve been using those pieces a lot more than we were last season. So we’re getting more of a skull-like look to the walkers. Now we have a lot more ammunition in our arsenal. You look at the graphic novel and there’s always exposed teeth. So instead of having to make dentures for everybody, we came up with a way to be able to put teeth in any zombie that we want in order to make them look like that grinning skull where their lips are rotting away.

Q: You just finished filming The Walking Dead webisodes. What was that like?

A: Oh it was great. It was so much fun. At the end of last year Frank asked if I was interested in directing an episode. And I told him I’d love to, and then all of a sudden this idea came up about doing some webisodes. So one of the things I always found most interesting was analyzing how people handle the zombie outbreak as it’s happening. And we looked at the Bicylce Girl character and there was so much sympathy generated from her zombie — you look at her and yeah, she’s a monster, but she’s really sad and there was so much emotion involved that I thought, how great would it be to actually see her back story as a human? To see what sacrifices she makes in the last moments of her life before she’s torn apart by walkers. I’m sort of referring to the webisodes as the appetizer before The Walking Dead airs.

Q: Will you also direct an episode later this season?

A: I am directing an episode this season. It’s one of the last five episodes, but I don’t know anything about it yet. It’s driving me crazy. It’s like Christmas morning and I’m locked in my bedroom and I can’t come out until it’s ready. My 30-year high school reunion is the weekend when my episode starts shooting. So all my friends have been like “Are you coming??” And I have to write to them and say, “I can’t come. I’ll be shooting zombies.” And they’ll be like, “Pfft. Figures. You never change.”