The Walking Dead will have an epic presence at San Diego Comic-Con International 2011. In addition to a stellar panel with cast and crew and the debut of the Season 2 trailer, the AMC series will also unveil exclusive, officially-licensed The Walking Dead television series merchandise with partners such as Abrams Publishing, McFarlane, Rubie’s Costumes and NECA. Here’s a snapshot of the AMC merchandise for The Walking Dead on display at this year’s Con. 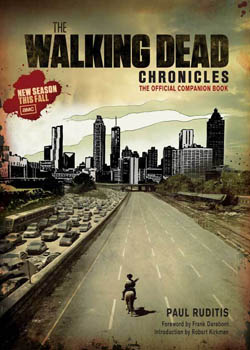 Abrams Publishing — The Walking Dead Chronicles: The Official Companion Book — Booth #1216
This one-of-a-kind behind-the-scenes guide focuses on both the making of Season 1 and the creation of the bestselling comic book which inspired it. The Walking Dead Chronicles is lav­ishly illustrated with never-before-seen photos, storyboards, set designs, makeup and visual effects shots, and page-to-screen comparisons of the comic and TV series. Featuring new interviews with comic creator Robert Kirkman and executive producer Frank Darabont among others, the book also includes a detailed episode guide, excerpts from early drafts and final scripts, and a glimpse into Season 2 and beyond. Available for purchase Sat., Oct. 1, 2011. Click here to pre-order at the AMC store.

At the Con, Abrams will also distribute free “Zombie Cubee” sheets — which attendees can assemble into a paper zombie figurine — and allow you to take your picture with a life-sized zombie. If you can’t make the Con, you can download the Zombie Cubee PDF by clicking here. 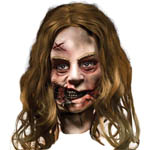 Rubie’s Costumes — The Walking Dead Halloween Costumes — Booth #3649
Rubie’s has a large assortment of The Walking Dead-themed prosthetics, masks, teeth and costumes for Halloween, many of which will be on view at their booth. Fans can peruse such outfits as “Little Girl Zombie” complete with robe, attached shirt, shorts and slippers, “Zombie Girl Mask” (pictured right), “Rick Grimes” which includes hat, shirt, belt and pants, and an assortment of other masks and makeup tools. Available for purchase this Fall. 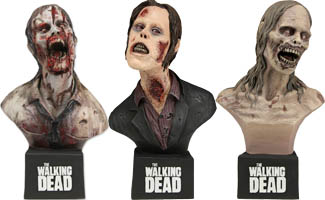 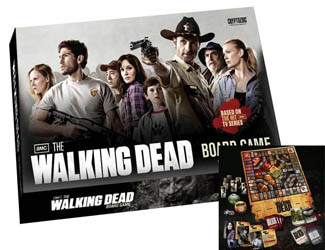 The Walking Dead board game allows you to take on the role of Rick, Andrea, or one of the other survivors then scrounge for weapons and supplies in a zombie-infested Atlanta. Visit destinations like the department store, the old folks’ home, and the CDC. When a player dies and becomes a walker, the game isn’t over either. Players who becomes zombies simply seek out the remaining survivors. You almost want to lose. Available for purchase September 2011.

Finally, Cryptozoic Entertainment will also release this Fall a set of The Walking Dead Season 1 Trading cards. The cards — there are 72 in total — will come in packs of five, with some packs featuring randomly inserted autographs and costume memorabilia cards.

Click here to pre-order some of the above items or to buy other The Walking Dead merch like posters and DVDs.