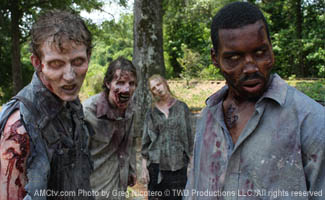 This week press outlets are ravenous over two new photos AMC released from The Walking Dead‘s Season 2 set. Meanwhile, Emmy predictions abound for the series and Robert Kirkman chats with ScreenJunkies about Season 2.

• To ScreenJunkies, Robert Kirkman trumpets that The Walking Dead Season 2 is “probably going to be the best television show ever made. Look out, The Wire.“

• Emmy magazine cites The Walking Dead as an example of networks successfully launching series with as few as six episodes. The magazine also interviews writer-director-executive producer Frank Darabont, who says of the series, “It’s about the moral decisions we make and the hope we hold on to — or don’t.”(No Link)

• Variety wonders if Emmy voters will nominate scifi and fantasy shows like The Walking Dead this year, remarking that the series is “among the class acts in a growing field of shows from genres that the Emmys have routinely ignored.”

• The Broadcast Television Journalists Association announced a nomination for The Walking Dead in its first-ever Critics’ Choice Television Awards. Of the nomination, TV.com fears The Walking Dead‘s honor won’t translate to Emmy love because those voters are “old curmudgeons who still think science-fiction is the domain of teenage boys.”

• TV.com puts The Walking Dead Episode 1 on its top 10 list for 2010-2011, asking, “Who thought a zombie movie that never ends would become one of the biggest hits of the season?”

• Variety thinks the moment when Rick shot the zombie girl in Episode 1, “Days Gone Bye” is one to remember, saying it “set the tone for what was to come.”

• Andrew Lincoln says to Variety of the response to the show: “I’m old enough and ugly enough now to know that you can never guarantee a reaction like the one we received.”

• The Los Angeles Times speaks with Sarah Wayne Callies, who shares that she doesn’t like to be scared: “You could argue that that means that I have the wrong job at the moment.”

• Greg Nicotero (“A Picasso of the horror genre”) walks The Hollywood Reporter through the many steps it takes to become a zombie.

• Fangoria gets Michael Rooker to confirm that Merle will be back, though he adds, “It’s just that we don’t know when yet.” Rooker doesn’t reveal much more to TOROmagazine.com.

• The Atlanta Journal-Constitution reports a The Walking Dead zombie alert is in place this week near the Atlanta Motor Speedway due to filming nearby. The paper adds that, during shooting on Monday in Cobb County, “simulated gunfire will be taking place during the filming of these scenes as actors are confronted by a horde of zombies.”

• USA Today talks to Todd McFarlane of McFarlane Toys about The Walking Dead action figures. Meanwhile, MTV has a picture of the Daryl Dixon figure.