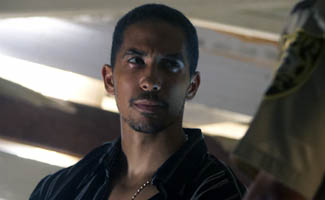 The Walking Dead actor describes how his part went from being an extra to a major character in one episode, then shares — appropriately enough — his grandmother’s post-apocalyptic survival skills.

Q: Robert Kirkman wrote the episode you were in. What did he tell you about your character?

A: Originally, my character was an extra. Frank and Robert ran with the idea of having a boss, somebody leading it. It was awesome ’cause Frank kept sending over script pages in the middle of the night with more dialogue.

Q: And suddenly you’re the custodian running the place. Have you ever had to deal with a situation that you weren’t prepared for?

A: Many times. My father made it a point of doing it. He was a Marine so he waited ’til I got some muscles on me and he was like, “Come here.” I went with him and he’s like, “We’re going to add to that house right there. I need that cement mixed. I need all those blocks over here in one pile so we can start laying them.” I’m like, “Daddy don’t do me like this. What are you talking about? I am an actor.” But we got it done. You got legs, feet, hands, a brain. You got everything you need. That’s how my dad is and he’s right. I’m good in a clutch.

Q: Have you ever worked with the elderly?

A: No, but I used to go around with the church to visit the sick and shut-in as a kid, every first Sunday, to give the elderly communion. And my grandmother had just passed when we started filming the show so it was kind of like therapy. She lived right around the corner from my mom. I was extremely close to her.

Q: Did you think of her when the old woman entered to break up the stand-off?

A: She came in and gave one of my grandmama’s smiles. My grandmother could calm a situation with one smile. She was an angel.

Q: You used to be a boxer. Did that training come in handy for The Walking Dead?

Q: What other skills do you possess that would be helpful in a zombie apocalypse?

A: My grandmother cooked everything from turtle soup to possum. She taught me how to take any animal and fricassee it up and make it taste delicious.

Q: What’s your favorite thing about this character?

A: Most people, as tough as they seem, retreat. I’m like, “Retreat? Hell, I just got here.” Fight or flight. The doctors were out. He’s just a janitor but he’s the guy who is going to fight. You mix morals with a guy who can fight back and you got a real leader. If he doesn’t know what to do, he’s going to find someone who does.

Q: Guillermo is called G. Do you have a nickname?

A: My friends call me NBJ. It’s a drink too. In 2006, my friends started going to all the bars and were like, “Let me get a NBJ. You don’t know what a NBJ is? It’s vodka, water and three limes baby!” They started doing it and I was like, “That’s not going to catch on man,” and then I went to a bar in LA and and said, “Let me get a NBJ,” and they knew what it was and I frickin’ flipped!

Q: You were in the recent alien invasion movie, Battle: Los Angeles. So, what’s scarier: zombies, aliens or humans?

A: Humans. The capacity for man’s evil is beyond measure. Think about this: Man came up with the zombies and aliens.