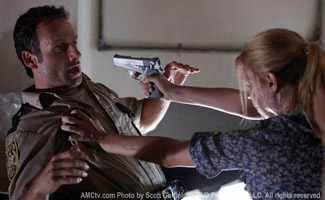 Gold Derby speculates that Andrew Lincoln is a potential Emmy nominee for best actor and TV Squad campaigns for Laurie Holden’s “kick-butt” Andrea to get more screen time. Meanwhile Robert Kirkman is set to be the guest of honor at New York Comic Con and Gale Anne Hurd is talking transmedia and The Walking Dead.

• Gold Derby discusses the best actor Emmy race and puts Andrew Lincoln on the list of those “hoping for their first Emmy recognition.”

• Robert Kirkman will be the guest of honor at New York Comic Con in October, according to a press release from the event.

• Hurd is also producing two action films on Lifetime’s 2011-12 programming slate, according to The Hollywood Reporter. Daemon’s TV reports that the films are Last Man Standing and Malibu Heist Club.

• CNET reports that Vudu has added The Walking Dead, in HD, to its streaming service.

• Patch credits “a string of blockbuster movies and television hits,” including The Walking Dead, with improving comic book sales.

• Norman Reedus appeared at Texas Frightmare Weekend, signing autographs with his co-stars from The Boondock Saints, Sean Patrick Flanery and David Della Rocco, according to Examiner.com.