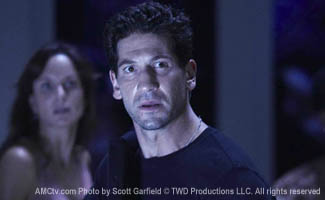 This week AMC comes in fourth on Ad Age‘s Entertainment A-List thanks to The Walking Dead‘s ratings, while Robert Kirkman discusses Shane with TV Guide and Andrew Lincoln talks to IGN about Season 2.

• AMC lands at No. 4 on Ad Age‘s Entertainment A-List, which cites The Walking Dead as the network’s first “bona fide hit.”

• Robert Kirkman talks to TV Guide about Shane surviving on the TV show but not the comic: “We’re adapting stuff directly from the comic book,” he says, “but Shane is going to screw it up.”

• IGN has a video interview with Andrew Lincoln, who says of Season 2, “We’re going to honor the structure and the tone of the graphic novels, so we’ll be going to the countryside.”

• Variety reports that Frank Darabont will be honored with the George Pal Memorial award at next month’s Saturn Awards. (No Link) Darabont has “successfully transcended the horror genre and created a gripping and powerful series,” the announcement’s press release says.

• A New York Times article quotes a media analyst who calls The Walking Dead “a metaphor for our fears.”

• The Irish Independent says of The Walking Dead, which debuts on Ireland’s RTE next week, “How ironic that a programme about dead people should be one of the liveliest things on television.”

• BuddyTV culls The Walking Dead‘s lessons in surviving a zombie apocalypse: “Television zombies are overachievers who routinely ignore passive coma patients in favor of the physically fit. If you don’t have a convenient coma available, try to nap a lot.”

• Patch puts a zombie apocalypse on its list of “some fictional apocalypses that I wouldn’t mind living through.”

• Examiner.com has a gallery of The Walking Dead‘s behind-the-scenes photos to tide fans over, since “waiting for the second season… is almost torturous at times and it’s only May.”

• Twitch highlights director Stephen Kay’s supernatural thriller Cell 213, which stars Michael Rooker and will be released in the U.S. in July.