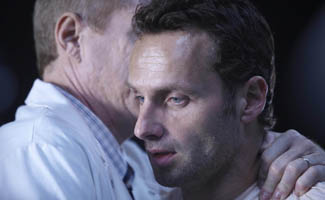 Fans this week reflected on Dr. Jenner’s comment about his colleagues committing suicide in the face of the zombie apocalypse — and whether there’s more to his story than meets the eye.

• “Speaking of Episode 6 at the C.D.C., there was a conversation over dinner when Jenner relayed that some of the scientists escaped…but most chose suicide. Looks like a future tangential plot for TWD…” — BigJoe

• “Why would dozens of people in a safe place with food, power, booze, weapons etc. all decide to commit suicide ? Sure some would, in the end of the world scenario, but all? Don’t buy it. Jenner is not telling the truth, the whole truth, and nothing but the truth.” — mortonrchrd

• “He said some bolted but that others couldn’t face going out the door, facing what was outside and those were the ones that offed themselves. I can see that actually… knowing that everything is pretty much gone, fallen apart. I still don’t think Jenner was a bad guy or some kind of ‘mad scientist.'” — Angela52376

Log onto the Talk forum to join in any of these conversations or start a topic of your own.