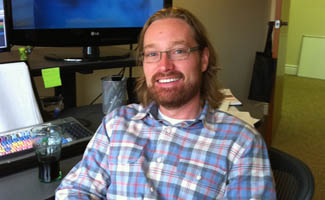 The Walking Dead editor discusses his work on the Pilot episode — which took home the 2011 ACE Eddie award for Best Edited One-Hour Series for Commercial Television — and explains how to make exploding zombie heads emotional.

A: Thank you! I get an award for going to work to play with zombies, so…

Q: What in your mind makes the Pilot an award-winner?

A: I think there’s a confidence in the filmmaking that assumes our audience is going to be intelligent. This episode — as well as the overall series in general — really stands out from what most other programs have. I think people were really shocked that it was zombies told in an intelligent way. That sequence with Morgan that starts when he and Rick part ways, and the inter-cutting of Rick going to kill “Bicycle Girl” and Morgan trying to kill his wife — you’re not expecting emotion when you’re watching a zombie show. You’re expecting a bunch of heads to explode. You do get that, but you’re not expecting to actually care about the characters along the way. Also something that I think is so fantastic is not have to spoon-feed things, especially with the sound design and the music. Less is more, whereas other things are just big and bombastic and crazy.

Q: Does that less-is-more philosophy factor into the picture editing as well?

A: Sure. When you have wonderful production design and wonderful and beautiful cinematography, you don’t have to cut-cut-cut-cut-cut to keep the story interesting. Rick riding into Atlanta, that’s told through a series of only 3 or 4 shots before he gets to the tank. And then the zombies come out…

Q: What sort of editing tricks do you use to heighten the tension and horror?

A: That’s the fun in editing: choosing when to show people what they get to see and hiding things from them, misdirecting them by making them think this is what the scary thing is going to be, and then no no no, it’s not that, it’s actually going to be this. Like, Rick is coming down the hallway in the hospital and it’s slow and you don’t really know what’s coming. It’s tense. You hear the tink-tink-tink of the fluorescent lights. Then he comes around and runs into the barricaded doors with the zombies inside and he gets frightened and runs right into a room that’s filled with nothing but darkness. And it’s just building up to that — it’s so fun pacing that to build the tension so that the audience knows that something is coming and then they see the zombie hands, and then cut-cut-cut, crash, silence, man stuck in a stairwell.

Q: Frank Darabont was very vocal about shooting the series on 16mm film stock to give it a grainy quality. How does that affect the editing.

A: 16mm is beautiful — it’s awesome, especially with the story we’re telling and the way [cinematographers] David Tattersall and David Boyd are shooting it. That said, in the cutting room, our dailies look awful [Laughs]. We transfer specifically to benefit the final product, so it doesn’t really matter what it looks like in the cutting room. So when you go to color it, you have to remind yourself, “It’s gonna look OK, it’s gonna look OK.” Then you go to the colorist and you look at it and you’re like, “Oh my God, it isn’t just saturated black and white. It actually is beautiful!”

Q: For comic fans saturated black and white probably sounds perfect. Did you take queues from the comic while editing?

A: We were constantly looking at the comic book. Well, maybe not constantly, but we certainly made sure to know where we were coming from. I did in fact look at the comic book a couple times while doing the Pilot, but in the end it’s about telling the best story with what you have. But Robert Kirkman was there and Frank is so in tune with the tone and the story that I think all that kind of naturally infuses into the dailies and storytelling.

Q: Thus far you’ve worked with Frank on The Shield, The Mist and The Walking Dead. Do you feel like one of his signature crew members yet?