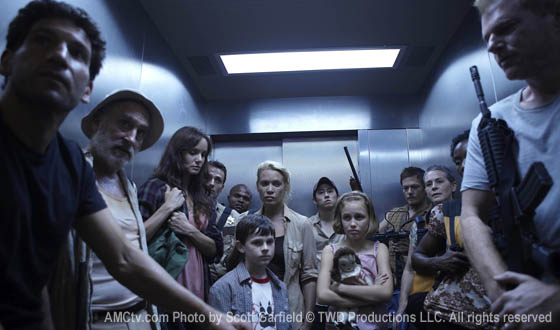 Surviving every day life can be a chore under the best of circumstances. Surviving the zombie apocalypse? Well… Weapons are at a premium, consumable resources are scarce and finding the will to face down the undead can be as challenging as finding your next meal. But don’t take our word for it: Listen to the cast of The Walking Dead, who have experienced the apocalypse first-hand and lived long enough to share some survival tips.

Sarah Wayne Callies (Lori): “My husband’s family is military. Preparation is just, from that family perspective, it’s just a part of what makes sense to do. I’ve got a go bag. It’s a backpack that’s ready in the closet at all times for whatever. So that’s all packed.”

Jon Bernthal (Shane): “I think I could bash a zombie’s head in better than anyone else. I could live in the woods pretty well. I’ve done that before. We’re actors — we’d all pretty much suck, but I think I would suck the least.”

Steven Yeun (Glenn): “I could be a scavenger. I’m a huge pack rat — I have my yearbook from first grade or kindergarten, and it’s with me even though I’m from Michigan. I have stuff that I can’t part with.”

Andrew Lincoln (Rick): “I hope to remember my family [in the event of an apocalypse] but I think it is funny because it’s a refugee situation, isn’t it? I think that you realize it’s food, it’s warmth, it’s the most basic needs because everything else becomes incidental. So yeah, my tennis racket, [laughs] my swimming trunks (just in case we had a zombie pool in the neighborhood), and … a gun.”

Lennie James (Morgan): “I liked the rifle. I think it’s clean, I think it gets the job done and you don’t have to get too close so you don’t get splattered in blood.”

Andrew Rothenberg (Jim): “I would get [the walkers] to chill out with just a bit of talk. Help them understand our side of the situation; get them to smile a little bit. That will break it up for a moment and give us a chance to get away or bash them over the head with a bat.”

Norman Reedus (Daryl): “I love the crossbow. I mean it’s just fun. Guns are fun, I can’t deny that shooting guns in movies isn’t fun. But I had never used a crossbow before, and it’s pretty rad. The only thing is that you got to reload quickly. What I need is one of those automatic crossbows if they even make those.”

Jeffrey DeMunn (Dale): “Twelve Gauge! If I could use any weapon that’s the one I would probably grab. I am [also] definitely in favor of the axe.”

Chandler Riggs (Carl): “The catering [on-set]? That was the best food we have ever tasted. They had the desserts — chocolate chip cookies and chocolate cake. It was so good. All for free, too. It was amazing. I [also] ate salad. Kind of even it out a little bit.”

Norman Reedus (Daryl): “I live in New York. We just got rats here, no squirrels. I did this film in China where we shot on top of the Great Wall. I remember for dinner during the weekend they made this huge feast: We had one plate of frogs that were standing upright. The next dish was slugs, just moving with all these sauces. Then the next dish was a giant snake that was coiled and the head was chopped off.”

Lennie James (Morgan): “Beans… Make sure you cook them all the way through and use a little bit of paprika.”

Lennie James (Morgan): “I hope that I am smart enough and brave enough to hold on to being a non-zombie as long as humanly possible. I’m not sure I’m that smart, but I think I would do everything possible.”

Steven Yeun (Glenn): “Whatever I lack in size and strength and speed, I kind of make up for in being grittier. When it comes to something like basketball I’m definitely not the best guy on the court, but I love elbowing and pushing people out or boxing them out. I don’t know. That’s where I get my joy. [Laughs]”

Noah Emmerich (Dr. Jenner): “I would love to think that I would be valiant and heroic, but we don’t really know that in life until we get there. And we’re fools to think that we could predict.”

Got your own survival tip? Share it in the comments section below. Newsletter subscribers who comment using their registered AMCtv.com accounts will be entered in a random drawing to receive a copy of The Walking Dead Season 1 on DVD. Not yet a subscriber? Click here to sign up.