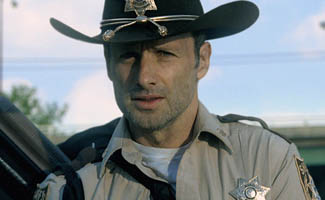 This week Entertainment Weekly talks to Robert Kirkman about Season 2, while the Los Angeles Times thinks Andrew Lincoln could get an Emmy nomination come July.

• Entertainment Weekly has Season 2 (and Season 3!) spoilers from Robert Kirkman on Tyrese, Michonne, the Governor and more.

• The Los Angeles Times predicts an Emmy nomination for Andrew Lincoln thanks in part to Bryan Cranston’s (AMC’s Breaking Bad) absence from the race this year.

• Entertainment Weekly quotes Andrew Lincoln on Season 2: “The CDC was their big hope and that’s gone so the future is bleak but humans also have a strong survival instinct.”

• Film Music Magazine interviews The Walking Dead composer Bear McCreary, who explains on AMC’s show he “used a lot more electronic textures, to blend in with the smaller string orchestra we recorded each week.”

• Director Edgar Wright tells Collider.com that Frank Darabont has asked him to direct a Season 2 episode, though he might not do it.

• TV.com points to The Walking Dead in its argument that kid monsters are scarier than adult monsters: “The scariest zombie from The Walking Dead? That first little girl, hands down.”

• There was more Blu-Ray/DVD-related press, from NorthJersey.com (“It’s gory enough to satisfy hard-core horror junkies and smart enough to qualify as one of the best shows on TV”) and The Ottawa Citizen. Mania notes, “the mere fact that any network even put on a show about a zombie apocalypse shows that they believed in it strongly.” The Vancouver Sun, the Bellingham Herald and HollywoodChicago.com also like the show.

• BroadwayWorld.com reports that you can catch Jon Bernthal on stage in Los Angeles starting later this month in a production of Small Engine Repair.

• Zap2it‘s review of the trailer for the film Super-8 mentions Noah Emmerich, “who had a memorable turn as a disillusioned NIH scientist at the end of The Walking Dead‘s first season. Emmerich has also been cast in a pilot for NBC’s S.I.L.A., Deadline Hollywood reports.

• Examiner.com features the The Walking Dead‘s Season 1 behind-the-scenes photos, saying they remind “viewers how much work goes into a production as complicated as The Walking Dead.” ComicBookMovie.com and The Daily BLAM! have them too.

• A Los Angeles Times article mentions The Walking Dead in its discussion on TV channels using new ways to help publicize their shows, explaining how the online motion comic “spread the apocalyptic concept to genre fans and those unfamiliar with the show’s origins as a cult-favorite comic book.”

• Norwegian zombie fans, rejoice. Broadband TV News reports that the Fox Crime channel is launching in Norway and has secured the rights to The Walking Dead.