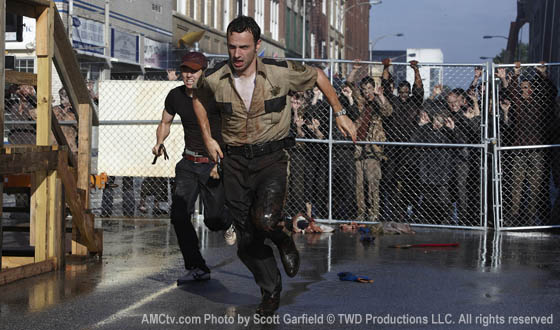 The Acacemy of Science Fiction, Fantasy & Horror announced today the nominees for this year’s 37th annual Saturn Awards, and The Walking Dead was honored with a total of six nominations across categories such as Best Television Presentation, Best Starring Role in Television and Best Actor, Actress, Supporting Actor and Supporting Actress in Television.

The Walking Dead‘s nominations are among 11 garnered by AMC this year — more than any other television network. In the acting categories, Andrew Lincoln (Rick) was nominated for Best Actor in Television. Sarah Wayne Callies (Lori), for her part, was nominated for Best Actress. Their co-stars, Steven Yeun (Glenn) and Laurie Holden (Andrea) received Best Supporting Actor and Actress nods, respectively while Noah Emmerich (Dr. Jenner) received a nod in the Best Starring Role in Television category.

Competing with The Walking Dead and its stars will be such series as ABC’s Lost, Fox’s Fringe, Showtime’s Dexter, HBO’s True Blood, and AMC’s own Breaking Bad.

The 37th annual Saturn Awards will take place in June in Burbank.