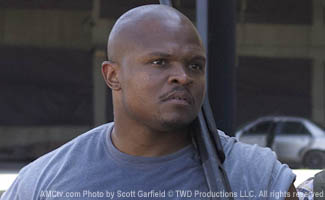 On Tue., Jan. 18 at 8/7c AMC begins a two-night encore of the entire first season of The Walking Dead. As part of The Walking Dead encore experience, AMCtv.com will be posting interviews with the show’s talented supporting cast. This week, actor IronE Singleton compares growing up in the projects with The Walking Dead, explains how football prepared him for on-screen violence and theorizes what’s behind the name T-Dog.

Q: You grew up in Atlanta. What was it like returning there to shoot The Walking Dead?

A: It was surreal. Although the buildings have been torn down since then, it was an inner city housing project that was really dilapidated. I lived that life for so many years, trying to avoid violence and the drug epidemic, and here I was working on a major Hollywood production.

A: There was this one time, I think I was four years old: My mom left us home and my brother and I ran into the street and were hit by a car. I ended up at a clinic, which was just a hop away from the quarry. Not even a skip and jump. Just a hop.

Q: The Walking Dead is a story about survival. Do you think your personal story compares?

A: My personal story would be worse. [Laughs] As a kid not having any control over what you’re experiencing, it was like a nightmare. Your only objective is to survive. But football was my saving grace. My mom died from HIV when I was 19. I don’t know if she contracted HIV through sexual contact or through heroin use but she, along with a couple of my uncles and a couple of my cousins, they all contracted the disease. I was the only one pretty much in school at that time. That was the reason why I didn’t do certain things. But I did run the streets. I did carry a gun. People ask me if I regret those things. I can’t say I regret them because I wouldn’t be who I am, but they do make me sad.

Q: That world you describe actually sounds like The Walking Dead…

A: Yeah definitely. It made me think about my mother when she was out in the streets all night, looking for that next fix, looking for a hit. They were kind of like zombies; they were the walking dead, because there was no ambition involved. No sense of responsibility. They were just wandering the streets. Their eyes would be blank. You can seriously compare.

Q: Did your football experience come in handy during your fight with Merle?

A: Without a doubt. That’s the reason why I’m as bulky as I am. I need to work on trimming this thing down because my metabolism has slowed down tremendously. [Laughs] It prepared me for that scene because I could take the falls on the ground without any cushions. I’m used to the contact. Also in a mental sense, because it was so hot on that rooftop, just having that perseverance. There were times where they would be like, “IronE you want to take a break?” and I’m like, “No. Let’s get this shot. Let’s do it.” Because that’s how it worked in football. I don’t care how tired you are, this game’s not over until that horn sounds.

Q: Were you surprised by your character’s ability to help Merle after his racist comments?

A: I’ve gotten phone calls. It got a very strong reaction. That lets me know we did a good job. But it didn’t surprise me that that was T-Dog’s decision. That’s something I would do because, how does it affect me to leave him there? That’s bad karma. There are repercussions for your actions and to purposely leave Merle Dixon on that roof would be wrong. There’s a great possibility that I could go down those stairs and get eaten by a walker just because of that.

Q: It sounds like Merle was lucky you were the actor playing T-Dog.

A: [Laughs] He wasn’t lucky enough though, because I tripped. That right there is karma. Is that because of what Merle had coming? Because of all the negative things he had done? Maybe.

Q: Any theories on what T-Dog stands for?

A: I know that one of the main characters in the comic book series is Tyreese, and I’m hoping that they were being strategic. He can say that he’s Tyreese, like, “Oh yeah, T-Dog’s my nickname from back when I played ball … all the guys called me T-Dog.” I don’t know that’s the case, but I’m hoping!

Click here to read an interview with the actor who brawls with T-Dog on the roof, Michael Rooker (Merle Dixon).