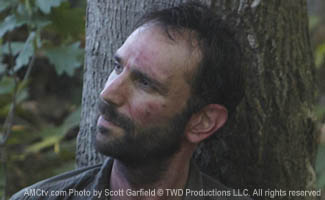 This Tue., Jan. 18 at 8/7c AMC begins a two-night encore of the entire first season of The Walking Dead. As part of The Walking Dead encore experience, AMCtv.com will be posting interviews with the show’s talented supporting cast. This week, actor Andrew Rothenberg relates his personal experience with premonitions, describes a near-death experience and shares his strategy of killing walkers with comedy.

Q: As someone who earns a living emoting, is it hard to play a character who holds so much back?

A: It’s not. I enjoy saving it. I think it makes it more intriguing to the audience because they want to know what is going on in that person. I used to work with Michael Shannon in Chicago and he would say to me, “Put a fire under it Rothenberg,” because I was always quiet and reserved and then I would find my moment and let it out. That said, I’ve done a lot of roles where I’m the crazy crackhead or the loud boisterous villain. When I’m given the opportunity to let loose and go nuts I love it.

Q: Malcolm, the vampire you play on True Blood, seems so different from Jim on The Walking Dead. Which are you more like?

A: I’m neither. I’m a nice Jewish boy from the valley in California. [Laughs] But most of the characters I play have a lot going on in their head. Jim, although he’s quiet, you can tell there’s a lot going on there. Same thing with Malcolm. He’s evil but he really likes playing with people and being manipulative. I don’t think I’m like either of them though, which is fun.

Q: Are you as good a mechanic as Jim?

A: I can get under a hood and do a couple things and I have an uncle that helped me do a few major things. So, I’m not afraid to get my hands dirty and make a couple trips to the auto parts store. But I think Jim knew a little more than me — or tried at least. He didn’t have much to work with. If you had been on that set, I don’t think one of those vehicles was able to drive more than about half a mile before they all conked out. It was hysterical.

Q: What skills do you personally possess that would be useful if walkers attacked?

A: I’m actually really good at diffusing tense situations with humor. I would get [the walkers] to chill out with just a bit of talk. Help them understand our side of the situation; get them to smile a little bit. That will break it up for a moment and give us a chance to get away or bash them over the head with a bat.

Q: You think they would appreciate comedy?

A: I don’t think anyone has really tried is the thing. It’s always scream and hit or shoot, and with times the way they are we could use more compassion towards our enemies, zombies included. [Laughs]

Q: In regards to Jim’s premonition, did you know more about what he dreamt than we did?

A: I was told nothing other than what was in script. I created a few different possible scenarios that would work. I believe he started out digging graves because he did have a dream that there would be some kind of zombie trouble, and then, honestly, I believe the heat kind of got to him. I would see some stuff online where people were like, “Oh, we have a clairvoyant in the group now.” I didn’t see it like he was a psychic, per se.

Q: Have you have ever had a dream so powerful that you acted on it?

A: When I was a kid, I had a dream that we were at some kind of dam and my sister fell in the water and drowned. The next day my parents told us we were going to go to Las Vegas and then by the Hoover Dam and I freaked out. I was like, “No, we can’t go to the dam!” We went anyway and nothing happened.

Q: Why do you think Jim decided to call it quits?

A: Aside from losing his family, the way he loses them, to have them be eaten? I don’t see how anyone could live with that. That said I am not the type of person that would be willing to be left by a tree. GET ME TO THE CDC PEOPLE. LET’S GO! STEP ON IT! I’ve always been one to try and find a way out.

Q: Have you ever been in situation where you felt like your life was in danger?

A: I was in a production of Jesus Christ Superstar and I was playing Judas. I was supposed to hang myself and I accidentally passed out on the noose, but there was nothing I could do. There was no survival instinct involved. It was just oops I’m choking to death. Somehow this necklace I was wearing got hooked up in the harness and put just enough pressure around my neck. There’s a backstage guy who comes out and helps me get down and I was just dead weight. He kind of freaked out. Eventually, I wake up surrounded by all these apostles. I wasn’t sure for a second if I made it back. We didn’t wear a necklace after that.

Click here to read an interview with Emma Bell, the actress who plays Amy, one of the victims of the zombie attack.