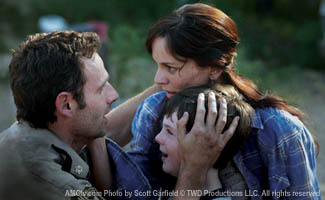 In addition to landing on several lists of the year’s best TV shows, this week The Walking Dead is compared to both Lost and The Sopranos, and TV Squad discusses how much it’s looking forward to Season 2.

• No. 2 on the Miami Herald‘s list of the year’s top five TV shows is The Walking Dead. The newspaper notes, “It shattered basic-cable ratings records like — well, like zombies breaking open bones in search of marrow.” The St. Petersburg Times ranks The Walking Dead at No. 5, the Pittsburgh Post-Gazette at No. 8 and Newsday at No. 9. The Walking Dead also gets an honorable mention from the St. Louis Post-Dispatch.

• The Detroit Free Press‘ top moments in TV include Steven Yeun ‘s (Glenn) “heroic entrance in [The Walking Dead‘s] second episode.” Meanwhile, the Chicago Sun-Times says The Walking Dead‘s special effects (“the missing limbs, the rotting faces, the spilled innards, the seriously unconditioned hair”) were one of its favorite things about this year.

• The Walking Dead is one of Gawker‘s favorite TV shows this year: “It’s the rare sci-fi show that can find just the right balance of genre fare and traditional drama, but this show seems to find it each week.” The San Antonio Express-News‘ list of the year’s best TV features The Walking Dead, and the Associated Press includes the drama as an example of “when TV soared” this year.

• Robert Kirkman tells the Courier-Journal that his main focus is still on the comics, even though he’d like to write an episode for Season 2: “I don’t ever want it to appear like, ‘Hey, I got this show — comics aren’t important.'” Kirkman also talks to USA Today.

• The Los Angeles Times includes The Walking Dead‘s Amy on its list of beloved TV characters that died this year: “Didn’t you scream ‘Nooooo!’ at the TV. We did.”

• Speculating to MTV about what’s coming on The Walking Dead, Jon Bernthal says, “Every episode, somebody could get whacked. We’re all feeling that — we could go at any time. I think it adds to the desperation of the show.”

• Variety mentions The Walking Dead in a discussion of how the broadcast networks this fall paled in comparison to the cable networks offering “signature series.”