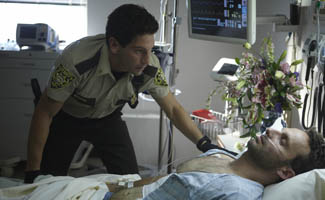 Various outlets this week heap end-of-the-year honors on The Walking Dead, while The Wrap and Reuters discuss the drama’s Golden Globe nomination.

• E! puts The Walking Dead at No. 9 on its ranking of the year’s best TV dramas: “We came for the zombies (who can resist?) but it was the compelling and incredibly real survivors who kept us hungering for more.” The zombie thriller also landed on People‘s list of the year’s top 10 shows, getting credit as “a landmark in bringing horror to TV.” (No Link)

• The Hollywood Reporter emphasizes about The Walking Dead, “If any series managed to pull in people who wouldn’t normally dabble in a big-screen gore-fest, this was the one.”

• The Walking Dead‘s Pilot, “Days Gone Bye,” is No. 8 on Movieline‘s 10 best TV episodes list: “You’d think a closing shot of zombies overtaking the tank where Rick finds momentary respite would be chilling, not poetically beautiful, yet somehow it was both.”

• The Walking Dead gets credit for AMC’s sixth-place showing on TV Guide‘s top 10 list, as it proved that “horror has a place on the top shelf of TV.”

• Ad Age includes The Walking Dead in its list of TV high points, calling it a “cult phenomenon. Forget vampires and superheroes. We want to watch monsters eating flesh.”

• The Wrap calls The Walking Dead‘s Golden Globe nomination for best drama “a particular surprise because the [Hollywood Foreign] Press Association traditionally hasn’t recognized horror or sci-fi.” Reuters points out that The Walking Dead (and HBO’s Boardwalk Empire) “were among the few new shows making headlines at the Golden Globes.”

• Gale Anne Hurd talks to the Los Angeles Times about The Walking Dead‘s appeal: “I think there’s a global zeitgeist about pending catastrophe.”

• Reacting to The Walking Dead‘s Golden Globe nomination, Robert Kirkman tells the Los Angeles Times: “I never in a million years thought this comic book would get made into television. Zombies eat people. You don’t see that on television every day.” Also, Kirkman won’t tell TV Guide what Dr. Jenner whispered to Rick, saying only, “It’s monumental.” (No Link)

• The Hollywood Reporter cites a lesson learned from The Walking Dead‘s success: “Networks shouldn’t be scared of serialized programs.”