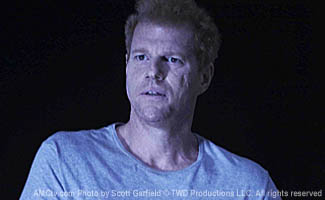 The Walking Dead actor reveals what his character Dr. Jenner might have whispered into Rick’s ear and why he’s personally so at ease when it comes to talking about brain synapses.

Q: How comfortable were you with working in a lab and talking about brain synapses?

A: I’m actually pretty scientifically interested. I have a lot of friends who are doctors, so the idea of the virus and the synapses in the brain and how the nervous system works was actually all pretty familiar to me. For me, in order for that stuff to have any sense of truth to it you do have to understand what you are saying. I’m not one of those people that can just say words. Some people can, but I’m not that good of an actor to do that, so I do need to know what I am talking about. So I did sort of learn the hypothetical of it all — I can connect the dots.

Q: Would you go crazy living alone in the CDC?

A: I think I probably would.

Q: What’s the most extreme thing you’ve ever done?

A: Making the show was pretty extreme. It was really hot in Atlanta, it was long days. It was very pressured — we had very little time to live with the material. The pages would come in the night before we were shooting; Frank was sort of doing his brilliant tinkering with the dialogue and the script right up until the very last second. And he’s obviously a brilliant writer and working with such great source material, it leaves the actors with very little time to absorb it. That’s sort of the fun of it as well.

Q: How many times did you chuck that wine bottle through the big room? Did you ever accidentally hit any camera equipment?

A: That was a blast — so much fun. I never hit any camera equipment though. No injuries incurred [Laughs].

Q: So fess up. What did Jenner whisper into Rick’s ear?

Q: Do you relate to Jenner’s decision to stay in the CDC?

Q: Jenner does everything he can to keep his promise to his wife. What’s the furthest you’ve ever gone to keep a promise?

A: I’d be breaking a promise if I told you.

Q: You’re starring in J.J. Abrams’ upcoming Super 8, about an alien invasion. Did The Walking Dead help get you in the mindset?

A: I wouldn’t say so really. They’re not really related in that way. Although I will say that The Walking Dead got me in the mindset to do the video I wrote and directed for Funny or Die about zombies. I’m not really a zombie genre guy, I’m not particularly versed in it. Doing The Walking Dead sort of turned me on to the whole thing.

Click here to read an interview with the actor who plays one of Dr. Jenner’s less-than-grateful houseguests, Jon Bernthal (Shane).