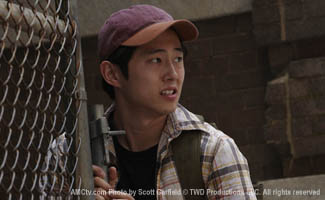 The actor discusses the pleasures of receiving a walker back massage, describes the smell of prosthetic intestines and relates the grossest thing he’s ever seen.

Q: You worked with The Second City in Chicago. Have you been able to use your improv skills in The Walking Dead?

A: Yes. There are moments where there are no written lines, but there are actions: Glenn and Rick run down the street with zombies chasing them, jump over a fence and get to the other side. You can’t just not say nothing while you’re being chased by zombies. You have to scream, something. It might not be the most intense improv in terms of making up a whole set of dialogue and back story, but you kind of just speak freely.

Q: Are you scared of the walkers in the show?

A: Personally, I am more terrified of ghosts. It stems from the fact that it’s not tangible per se. It’s something I can’t physically harm. What does freak me out about walkers is that you can hit them, rip their arm off, let’s say, and they’ll still keep coming at you. It’s that persistence that is terrifying because it borderline-treads on that idea of a ghost, where I can’t do any harm to it.

Q: Have you ever seen a ghost?

A: Oh yes. It was one of those — what’s it called? Sleep paralysis? I woke up and I couldn’t move. It happens a lot to a lot of people. But I opened my eyes and saw a dark figure at the doorway just laughing. I freaked out, woke up, and then nothing was there. It was pretty much a dream. I don’t know if it was an actual ghost but that was good enough for me.

Q: Did you get to know any of the walker extras?

A: I did get to talk to some of them. One gave me a back massage, which was nice. She said she used to be a masseuse so I said, “Ok, great.” I hope no fans were watching to see Glenn cavorting with the enemy.

Q: Then the cameras started rolling…

A: And she was snarling at me through a fence. It was pretty crazy.

Q: What did the guts of the walker you were smearing on yourself really smell like?

A: Oh my gosh, horrible. So horrible. All props to Greg and his team. It was not hard to believe what was going on. It didn’t smell like what guts probably would, thank God, or I would have totally yakked. But it definitely had this chemically, rubbery smell. All I know is it looks ridiculously real. The moment we had it on us, Andy and I looked at each other in absolute disgust.

A: We were playing hockey and my brother was skating backwards and he slipped and landed on his arm and his arm literally broke in half. His forearm was in two pieces. It wasn’t off, obviously, but his arm was bent in a way that it should never be bent. It was one of the most disgusting things I’ve ever seen.

Q: What skill do you personally possess that would come in handy during a zombie apocalypse?

A: Maybe determination. Whatever I lack in size and strength and speed, I kind of make up for in being grittier. When it comes to something like basketball I’m definitely not the best guy on the court, but I love elbowing and pushing people out or boxing them out. I don’t know. That’s where I get my joy. [Laughs]

Q: The director of episode 2, Michelle MacLaren, told us she has a big rat phobia. Did you have any trouble shooting those scenes?

A: I’m such a jerk because I love animals. All I could think about was petting those rats and holding them, and I am that guy where I will want to make you enjoy it like I do. When I found out she didn’t like rats I was like, “Michelle come on, just pet one.” I would bring them over to her. “Just pet it.” She would flip out. Flip out. She was pretty brave. Obviously, she wasn’t happy about the circumstances but given the fact that there were live rats, like five of them, running around she was pretty calm. She buckled down and said, “Alright, let’s shoot this.” She was standing on a stool, but she did it.

Q: Why weren’t you afraid?

A: I was a psych major in college and I actually owned two white lab rats. I had to train them and I took them home so that’s just kind of missing for me. That’s probably where I would say I’m close to Glenn. I’m stupidly curious. I will go and touch anything until I find out that it’s very harmful. I’m kind of your Bart Simpson with the electric cupcake thing.