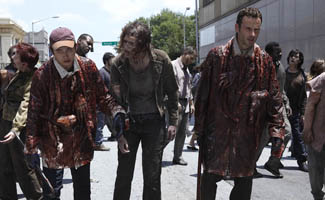 This week The Walking Dead‘s second episode garners a stellar review from Entertainment Weekly (among others), while Steven Yeun’s Glenn debuts to great acclaim.

• Entertainment Weekly reviews The Walking Dead Episode 2, “Guts,” calling it “the kind of thing that’s making AMC the place to go for unpredictability and artistic license on basic-cable.”

• Andrew Lincoln tells the Boston Herald, “I was very adamant that everything cost (Rick), that every bullet he fires, every axe he wields, it irrevocably changes him.” Talking to Entertainment Weekly, Lincoln compares The Walking Dead with Lord of the Flies.

• Jon Bernthal speaks to the Washington Post‘s Express Night Out about The Walking Dead as a human relationship story: “You can go through extreme guilt or desire, and suddenly zombies come out and you have to band together.”

• The Los Angeles Times says of The Walking Dead, “It’s writer Frank Darabont’s deft hand with the human element that has us coming back for more.”

• The Atlantic theorizes that The Walking Dead can be characterized as “Clint Eastwood Meets Gone With the Wind.”

• MediaPost cites The Walking Dead as an example of zombies “lumbering to the forefront of numerous pop culture platforms and the collective of the American unconscious.”

• Brandweek says a zombie-themed Toyota Corolla commercial that ran during Episode 2, “Guts,” was “so unexpected, I stopped fast-forwarding through the ad break to watch it.”

• MTV has a “spoiler-lite (but not spoiler-free)” list of the characters and concepts it hopes to see in Season 2.

• A true fan’s dream: A map of appearances, deaths, events and locations from The Walking Dead graphic novels.

• In discussing AMC’s renewal of The Walking Dead for a second season, the Los Angeles Times writes that the drama works “both as an emotional character study and an intestine-chewing gross-out.” The Associated Press says the show premiered as “an instant hit,” while Mediabistro called the first two episodes “blockbuster.”

• The Wrap reports that The Walking Dead logged “record ratings” overseas for Fox International, while World Screen says, “In most countries where ratings were available at press time, the zombie-themed series was the highest rated program on pay TV of the night.”

• The Wall Street Journal warns in its Episode 2 recap that The Walking Dead is “not a show for the squeamish.” For other recaps and reviews of Episode 2, “Guts,” check out the Boston Herald, FEARnet, HitFix, the Los Angeles Times, New York Magazine, the Seattle Post Intelligencer, Time and TV Squad.