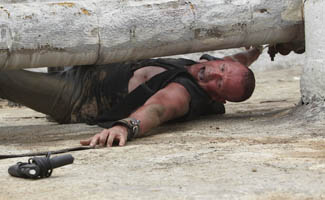 Mediaweek marvels at the ratings for the third episode and believes that they will stay stellar for the remaining three installments. And given those ratings, the New York Post thinks, The Walking Dead could do for AMC what The Sopranos did for HBO.

• Ratings for Episode 3, “Tell It to the Frogs,” went up from the week before, pulling in 5.1 million viewers, according to The Hollywood Reporter. Variety adds that The Walking Dead beat the 10 PM competition on ABC (Brothers & Sisters) and CBS (CSI: Miami) in the coveted 18-49 age range, with 3.3 million viewers. Mediaweek breaks down the numbers further, explaining that The Walking Dead’s increase in third-week viewers “bodes well for the remainder of the six-episode inaugural run.”

• Movie studios and technology and video-game marketers have noticed the ratings and are “looking to reach the show’s valuable audience of 18- to 49-year-olds,” Advertising Age reports.

• If the ratings are any indication, “AMC may have just found its Sopranos — a critical and commercial triumph,” the New York Post writes.

• Entertainment Weekly calls The Walking Dead the “surprise hit of the fall TV season” and describes it as “zombie gore-fest meets poignant survival drama.” (no link)

• Episode 3, “Tell It to the Frogs,” was the “first that made me sorry that Season 1 of The Walking Dead is only six episodes long. It’s the most compelling of the first three outings of the show,” TV Squad enthuses.

• Andrew Lincoln tells New York that he prepared for his role by reading Tom Wolfe’s Man in Full and Jay McInerney and J.D. Salinger, “just to get a sense of place.”

• Robert Kirkman chats with Entertainment Weekly about Michael Rooker, cameos, Lori’s dilemma, what to call a zombie, and how he’d miss cheeseburgers in a zombie apocalypse.

• Discussing the glut of comic-book spin-offs, Advertising Age notes that The Walking Dead is one of the few to have “exceeded expectations” so far.

• The Walking Dead “proves that there is plenty of room for success on cable outside of the summer,” perhaps inspiring TBS’s newest offering, Glory Daze, Mediaweek reports.

• Us Weekly says Episode 4, “Vatos” (airing on Sunday), is a “mix of absorbing characters and surprisingly raw emotions.”

• For recaps and reviews of Episode 3, “Tell It to the Frogs,” check out The Atlantic, CNN, Daemon’s TV, FEARnet, the Los Angeles Times, MTV, New York, TV Squad, The Wall Street Journal, and Zap2it.