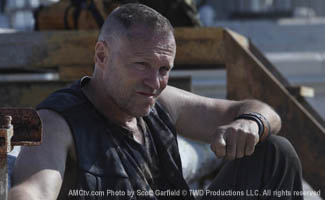 The star of Henry: Portrait of a Serial Killer and Cliffhanger discusses his tendency toward “bad guy” roles and describes wearing leather in 130-degree heat.

Q: Were you familiar with The Walking Dead before the series came around?

A: I was totally new going into it. I got the call on the phone, then I did everything I possibly could to be involved with it. When I started reading the comics, I could not put them down.The things that these people go through — oh my God. What would happen if zombies started coming down on my house? How would I protect myself? What would I do to protect my family? Its just crazy.

Q: You often get cast as the ‘bad guy.’ Is there something about those roles that appeals to you?

A: You know what, it all started back when I did my first film Henry, and it’s been going on ever since. I’m not one to totally buck the system, so whatever is on my plate I have to look at and decide whether or not I want to eat it. A lot of times that is what I get. You know how it is, somebody will see your work and like it and remember it, then decide to make it a role in their film. They think, “Oh man that guy who did that role, I want that guy.” I don’t mind it, I have fun doing it. A lot of the roles aren’t always bad bad guys — a lot of the time they are tough, down to earth, straight-forward individuals and they always have their own motivation.

Q: Your character in The Walking Dead isn’t in Robert Kirkman’s comic book. How’d you feel about that?

A: It’s totally more freeing. I mean I didn’t have that body of work, so it gave me freedom to use my own imagination and that’s a good thing as far as I’m concerned. Everyone involved knew (and it’s definitely known now) that there are going to be new characters in this series. So my guy [Merle] and my brother [Daryl] are new guys and I plan on putting my stamp on it, and having a good time doing it.

Q: Speaking of Merle’s brother, did you and Norman Reedus come up with any quirks that only brothers would know for the characters?

A: They had Norm looking at the stuff that I had done so that he could hear my voice. Not to mimick, but to get to know we are brothers and that we hang out together a lot. He’s an awesome actor, and I think when I see his work and I see my work we really make a nice combination. We really could be brothers.

Q: Merle wears a lot of leather. What was that like in the Atlanta heat?

A: Dude, I burned my ass up there! Someone said it was measureing 130 degrees on the rooftop. When I get cuffed and I am up there? Sitting on that rooftop was like being in an oven, and we were out there all day for several days.

Q: You had to beat up IronE Singleton — a former college football athlete. Was that difficult to stage?

A: [Laughs] I got my shots in. He’s a great guy and we had a great time playing those roles. It was a very physical scene; we were both exhausted. Even though it was fake, we rehearsed and we did what we could to make it as real as possible without really pounding each other. That’s stuff you work out between the actors and the stunt coordinators and it worked out really well.