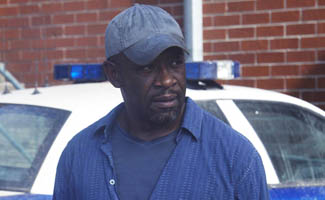 The British-born actor who plays Rick’s post-apocalyptic guide describes showing up to work with the undead every day then reveals his favorite zombie (as well as his favorite method of killing them).

Q: What kind of direction did Frank Darabont give you about your character?

A: I said this to somebody the other day: I went to work with Frank, and it’s really like a double-edged sword because I am really excited that I get to work with one of the directors that I most admire on the planet, but I was a little frightened. But he trusts his actors, and that gives you a lot of confidence to bring your ideas to the table . Frank acts more like a guide. He wants to see what you are offering and he’s helping you to bring that and move it in different directions.

Q: What was it like showing up to work with walkers every day?

A: It was fantastic! By the time I got to set, I had informed myself about the graphic novel and it was great seeing the realization of it. One of the things that they focused on was getting the zombies as real and pushing them as close to the edge as they could. The zombies are scary, and heartbreaking, and you can see the humans behind the dead eyes. That was exciting because it sort of informed everything else that we were doing.

Q: Did you have a favorite zombie?

A: There is one, and he was such a trooper because he had to be hit in the head with a baseball bat. He had a particular type of prosthetic on his mouth that pushed his lips down so all you could see is the gums at the bottom and at the top. And that thing stayed in his mouth for hours, so they had to be squeezing and spraying water into his mouth to stop him from dehydrating. We were shooting in Atlanta in incredible heat and humidity. He had to take the baseball bat to the head for at least seven or eight takes and he did a fantastic job. Not only that, but also he looked amazingly scary. He was a graduate of zombie school, and he must have graduated with flying colors.

Q: Do you think you could survive Morgan’s situation?

A: God, I hope I’m never in that situation. It’s a difficult one for me because my mind is so much in the character that I played, and how far he has to go and the things that he faces. I hope that I am smart enough and brave enough to hold on to being a non-zombie as long as humanly possible. I’m not sure I’m that smart, but I think I would do everything possible.

Q: You starred in the post-apocalyptic series Jericho. Which character do you think is better suited for the apocalypse — Morgan or Robert Hawkins?

A: They are very different guys; the thing about Robert Hawkins is that he very rarely, until quite late on in Jericho, faced a situation that he hadn’t already faced before. The thing with Morgan is that everything that happens to him once we meet him, although he may well already be a little bit better informed that Rick is, he’s still facing a lot of situations that he’s never thought he would have to face. So Hawkins would have a lot more things in his past that he could rely on. However, Morgan has survived and shown that he is a very quick learner and has managed to survive thus far, when quite a lot of the people around him obviously haven’t.

Q: The first episode is very much a two-man play between you and fellow Brit Andrew Lincoln. What was that like?

A: I knew Andy from back home in England. We hadn’t worked together, but we’ve got loads of friends together. And it was great because we are both, to a certain extent, outside of our bubbles, as we would say “living the dream.” We both really wanted to work with each other, so it couldn’t have been better.

A: I liked the rifle. I think its clean, I think it gets the job done and you don’t have to get too close so you don’t get splattered in blood.