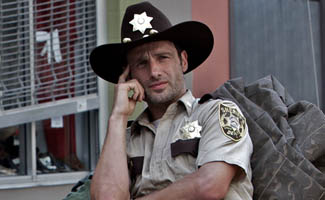 The actor who plays The Walking Dead‘s Rick Grimes describes getting to know Rick’s horse Blade (before it was eaten by walkers), and what he’d bring come the zombie apocalypse.

Q: What have you learned about zombies from doing this series that you didn’t know before?

A: Quite a lot actually. Well no, I tell a lie. Nothing. Because I’m kind of discovering the world as Rick discovers it and there are no answers. The genius thing about Robert Kirkman’s graphic novel is the fact that he doesn’t give any explanations. No one really knows what happened. You’ve only got personal accounts and I think that’s the power of it. It’s more about what happens now.

Q: Had you been horseback riding before you did the show?

A: Does it look like it? I didn’t realize how much riding they wanted me to do until they just kept filming basically. My wife’s a very good rider. After watching it she said, “Your riding has improved.” But my horse made me look good. He was an incredible stallion. Five years ago, I think, he was a wild horse and he was trained amazingly.

Q: What was his name?

A: Blade. It was the coolest thing. I got to wear Stetson cowboy boots and a bag of guns on my back on a horse called Blade. A dream come true. There’s a photograph. You’ve got to show it. [See below] It’s so nonchalant. Kicking back. Me and my horse. Just before he gets chomped. 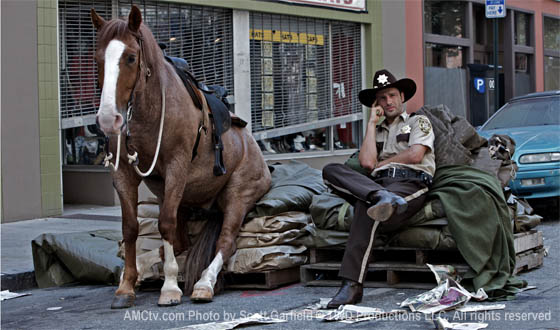 Q: Rick believes his family could still be alive because the photo albums are missing from his home. If you had to leave your life behind what would you take with you?

A: I hope to remember my family, obviously, but I think it is funny because it’s a refugee situation, isn’t it? I remember my grandmother always saying that was her biggest fear, possibly because she’s of that generation with the Second World War when it was a reality. I think that you realize it’s food, it’s warmth, it’s the most basic needs because everything else becomes incidental. So yeah, my tennis racket, [laughs] my swimming trunks (just in case we had a zombie pool in the neighborhood), and … a gun.

Q: What would you miss the most if there was a zombie apocalypse?

A: Well, prosciutto ham. Cause you’re not going to have much time to cure it. Go to Italy to get some ham. You never know, maybe after a while you get used to the zombie threat and you can set up your own delicatessen. Maybe a cappuccino. Ah, there you go. Yeah. I’d miss my Starby’s in the morning.

Q: Your sense of humor may have been wasted on this character. Were you trying to work it in?

A: I spent a lot of my career doing rom-coms and other comedic things, so it’s kind of nice for me to play someone who is the straight guy. The thing is: If you put too much comedy into this you lose the integrity of what we’re trying to make. We’re trying to make a really [laughs] serious zombie survival horror. If that’s not an anachronism.

Q: What qualities do you personally possess that would be helpful in a zombie apocalypse?

A: I don’t think I have that many, frankly. I’ll get my stunt double to ride me away. I like to think that I’ve got determination and I’m fiercely protective of the people I love. And that comes in handy, but that’s kind of what the show asks. They’re very ordinary folk but they’re the survivors and it asks that question: How far away have we gone? How sanitized have we become? How out of contact with the land have we become? I’d probably be useless. I’d entertain the troops.

Q: You brought your family to Atlanta for a while. Did your kids get to meet the walkers?

A: They’re both quite young. My eldest is three years old. It’s not the most kid-friendly set you would wish for. But in Atlanta there is a puppetry museum, so there are lots of Jim Henson puppets and there is a Big Bird there. They took a wrong turn one morning and went into the wrong trailer: It was Greg Nicotero and his team and they had this corpse that was rotting. My daughter just went up and started prodding it, and she seemed pretty cool about the whole thing. She said, “It’s kind of like a Big Bird for grown-ups.” That’s the way she explained zombies.