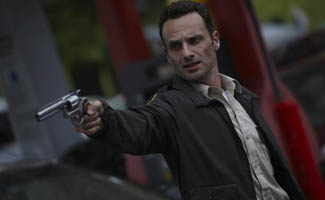 Variety includes Andrew Lincoln as one of its “New Faces for Fall” and The Walking Dead makes it into several fall TV preview lists, while Frank Darabont speaks to MTV and Robert Kirkman to Digital Spy.

• Variety profiles Andrew Lincoln, who thinks that sleepless nights with his newborn son got him the role of Rick Grimes: “I hadn’t slept in two weeks. I looked apocalyptic and gaunt. It was very ‘zombie chic.'”

• The Walking Dead is popping up in fall preview round-ups. TV Squad predicts, “It looks as though it will be as tasty to genre fans as brains are to zombies.” The San Francisco Chronicle says the show has “early buzz (Which often translates, by the time the show actually arrives, into heavy buzz).” The Detroit Free Press advises simply, “Don’t. Watch. Alone.”

• The Hollywood Reporter‘s TV critic talks up The Walking Dead on NPR, noting that Frank Darabont “knows how to tell a ripping yarn.”

• Frank Darabont promises to MTV that the comic’s major characters will eventually all appear on screen: “I think all the people who fans of the comic know and love will be in play here as we go.”

• Robert Kirkman praises Frank Darabont in Digital Spy for achieving so much: “There are a lot of amazing things that we’ve squeezed out of this budget.”