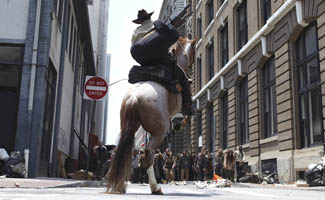 This week MTV chats with Episode 2 director Michelle MacLaren — who compares The Walking Dead with Breaking Bad — while The Atlantic notes that AMC’s version of the The Walking Dead looks to be true to the zombie genre.

• The Walking Dead‘s Episode 2 director Michelle MacLaren tells MTV, “Frank [Darabont] has really taken the time and the pace where it’s required, which is very much a Breaking Bad style and very much a feature style.”

• The Atlantic magazine thinks The Walking Dead might be able to present “the post-apocalyptic zombie narrative as it was originally intended.”

• A Contra Costa Times fall TV preview laments that The Walking Dead pilot was unavailable for review, but states, “we’re dying to see it.”

• Variety writes that The Walking Dead, a hit at Comic-Con, has “a presumed fanbase prior to its premiere.”

• Going to Germany? The Hollywood Reporter says The Walking Dead will be screened at this month’s Cologne Conference.