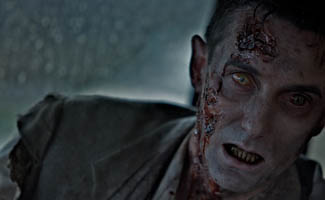 This week, MTV has Frank Darabont comparing Andrew Lincoln to a classic movie star, while on SFX Gale Anne Hurd explains why zombies are so popular these days.

– “You put this guy on a horse and he really does look like Gary Cooper,” Frank Darabont tells MTV about Andrew Lincoln.

– Executive Producer Gale Anne Hurd tells SFX that zombies are big now because “there’s something in the zeitgeist about human survival after an apocalypse.”

– Screen Junkies runs new photos from The Walking Dead that first showed up on AMCtv.com, asking, “Is it October yet? Damn. I’m counting down the days until AMC premieres The Walking Dead.” Dread Central, MTV and Comic Book Resources also point to the pictures.

– The Atlanta Constitution has a photo of a military tank being delivered to the set of The Walking Dead. (No Link)