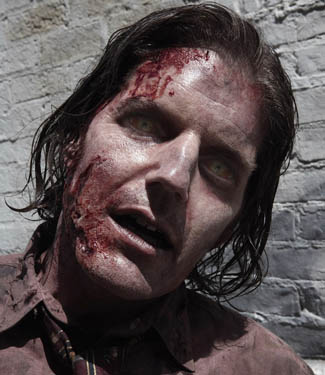 The British comic artist for The Walking Dead describes dressing up as a zombie in the AMC series and creating comic art based on live-action depictions of his artwork.

Q: What inspired you to play a zombie extra in The Walking Dead?

A: I just figured if I’m going to be on set watching it, I might as well be in it. I also wanted to get the make-up on as an experience. And I was lucky because I got to sit in the trailer and have the make-up applied by Greg [Nicotero]’s (for want of a better word) A-list guys. That was brilliant, the best part to be honest. It wasn’t like those horror stories you hear from all the stars who’ve had prosthetics put on for hours. It was an hour and a half, and it was air conditioned.

Q: Did you recognize yourself afterward?

A: I wasn’t so covered in prosthetics I was unrecognizable. What I found fascinating is they use relatively simple things: To make your hair look terrible, they just put conditioner in it. I think I had two scar prosthetics on, and the rest was just basic stage makeup. I was really impressed with the simplicity of it all. One big paranoia I did have was having to wear the contact lenses — I can’t even put drops in my eyes. But I never did have to wear them. Half of me was relieved and the other half was disappointed because I didn’t get to face my fear. But Greg was kind enough to send me a couple pictures having photoshopped in some zombie eyes, so I could pretend. [Laughs]

Q: You’ve drawn these zombies and characters for years. What’s it like to see them come to life?

A: What amazed me was that they used the drawings in the book as influences at all. Before I came on the set, I was thinking they’re not going to really use much of my designs, because it’s basically dead people wandering around. You don’t really design those. But when I got on set everyone was saying how much they were looking at the drawings in the book and going for this specific look. That really surprised me.

Q: You drew the series characters for the Comic-Con poster. Was it weird to create a depiction of a real-life depiction of your art?

A: It was kind of weird. I had to constantly think, “Don’t draw them as the actors.” Robert kept saying, just draw them as you would draw them normally. The funny thing is there was a character I’ve never actually drawn in my life, which is Amy, because she got disposed of in the book before I took over the art. So it was kind of weird drawing her, because I had to fight against not drawing the actual actor. I just had keep thinking, “Think comic! Think comic!” [Laughs]

Q: You’re known for your monochrome artwork. How do you feel about The Walking Dead being shot in color?

A: I think it would have been incredibly fool-hardy to make a black and white TV series. I know Frank [Darabont] was talking about a certain film stock they’re using, which I presume desaturates it. But let’s face it: If you’re watching it on the TV all you have to do is turn the color down to watch it in its “purest” form. [Laughs] But I saw the rushes and I saw the trailer at Comic-Con, and I certainly didn’t think, “Oh my God it’s in color. How disgusting!”

Q: What from your artwork are you hoping to see in future episodes?

A: It’s going to be interesting to see the winter stuff, which was pretty much when I came on board the comic. Everyone’s in winter clothes and it’s a completely different environment. And obviously I’m looking forward to seeing some of my characters come in, especially Tyreese and — I think everyone’s fan favorite — Michonne. The first six issues that I drew felt slightly transitional, and then the real meat and potatoes start when you get to the prison.

Q: You drew some pretty gross stuff in those issues…

A: Yes, I think things like that might have to be tempered somewhat. But blame Robert for that, he’s the writer! [Laughs] That man’s sick I tell you. It’s kind of weird because the worst part of doing all the gory stuff is actually the first read of the script, thinking “Oh God, I’ve got to draw that!” By the time I get around to drawing it, it’s just marks on paper. It sounds sick, but I could draw a cute little kitten being strangled and it’s the same as drawing a face. It’s just an ordinary day, get up and draw someone’s arm being drilled into. [Laughs] Simple as that.

Click here to read an interview with the other mind behind The Walking Dead comic book, Creator (and series Executive Producer) Robert Kirkman.