At 11:30 AM on Fri., Jul. 23, the San Diego Convention Center’s second largest auditorium was filled to capacity with zombie, horror and comic book fans alike. Some had been there for hours, sitting through a panel on Hawaii 5-0 to guarantee their spot for this moment: The Walking Dead Comic-Con panel. (Couldn’t make it? Click here to see video highlights).

The reason the crowd had come was that the stage would soon be populated with series Executive Producer, Writer and Director Frank Darabont, Executive Producer Gale Anne Hurd, Executive Producer and Comic Creator Robert Kirkman, Special Effects Make-Up Artist Greg Nicotero, AMC SVP of Original Programming, Production and Digital Content Joel Stillerman and moderator Eric Moro from IGN. Equally exciting, stars Andrew Lincoln (Rick Grimes), Jon Bernthal (Shane Walsh), Sarah Wayne Callies (Lori), Laurie Holden (Andrea) and Emma Bell (Amy) would join the filmmakers onstage later. But it was neither cast nor crew that first managed to work the crowd into a frenzy — it was the arrival of a horde of zombies (who then spent the rest of the panel roaming the aisles). 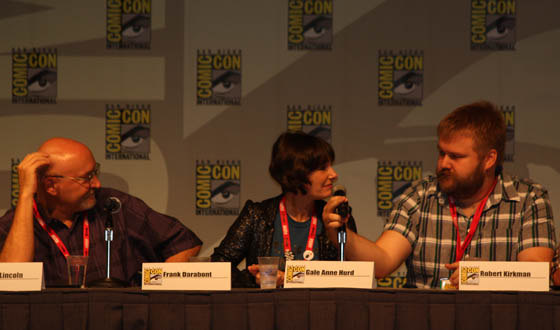 Kicking the discussion off, Moro asked why the filmmakers chose The Walking Dead? “The Walking Dead found us,” Hurd answered. Darabont explained that he’d always wanted to work in the genre, and Robert Kirkman’s series “was the venue to tell the zombie story I’d been looking for.” Nicotero summed up the series: “It’s about character, it’s about conflict, and once in a while someone’s gonna get eaten.”

As for Kirkman, he explained that he never expected his 75-issue-and-counting graphic novel to score an adaptation. (“You can’t do a zombie movie that never ends,” he said.) But he couldn’t be more pleased with the AMC production: “You hear horror stories about adaptations, but everything’s been perfect every step of the way.”

When the conversation turned to the cast, Darabont said, “We begged, pleaded and grovelled for the best actors we could get, and it worked!” His luck with the talent also extended to crew, it seems, as Darabont used the opportunity to announce that Bear McCreary, the music composer for Battlestar Galactica, had signed on to score The Walking Dead.

Audience enthusiasm over that announcement didn’t have time to dissipate before the lights dimmed and a four-minute trailer for the series began. Beginning with a high-speed police chase and ending with Rick surrounded by walkers in an army tank, the video highlighted some iconic scenes from the graphic novel: The shootout that lands Rick in a coma, his awakening in an abandoned hospital, and of course his cowboy journey atop a horse through the streets of Atlanta.

The crowd erupted in applause at the end of the trailer, at which time Moro brought onstage the cast, who received an equally enthusiastic response. The video was their first look at the series, too (at least from the other side of the camera), and each was visibly moved.

When they’d regained their composure, each actor was asked to describe his or her character: Of Rick, Andrew Lincoln said, “He’s a decent honorable man…  It’s one of the most exciting characters to play because he changes morally.” When Jon Bernthal described Shane saying, “He does everything he possibly can to honor his best friend,” the crowd burst into laughter. “I think they’ve read the comic,” mused Darabont.

Sarah Wayne Callies explained how the show’s more graphic elements have scarred her: “I woke up this morning with my fists clenched, shaking from a nightmare,” she said. “Greg Nicotero has ruined my life.” Matters were not improved, then, when the walkers, who were still roaming the aisles, approached the stage causing Callies to recoil and knock her name tag to the floor.

During audience questions, Greg Nicotero quelled fears that the material would be tamed for television. (“We’re dedicated to making this as authentic as we can,” he said.) Darabont, for his part, teased at the possibility of a special DVD feature that would follow the comic’s lead and screen the pilot episode in black and white, while Bear McCreary discussed his plans for the music: “I’m scoring it like a drama, but there are some times where you have to do the obvious thing once in a while,” he said, referring to classic horror noises.

Click here to see video highlights from the Comic-Con panel.

The panel ended with an impromptu repeat screening of the trailer (the crowd was hungry for seconds), after which the cast and crew headed down to the convention’s exhibit hall to sign autographs at the Image Comics booth. As fans snaked around the booth — some having waited for hours to get their comics and posters signed — Darabont turned to Kirkman and said, “Did you ever imagine your comic was going to be this big?” “Yes,” Kirkman replied, before breaking into a grin. “Absolutely not,” he admitted. 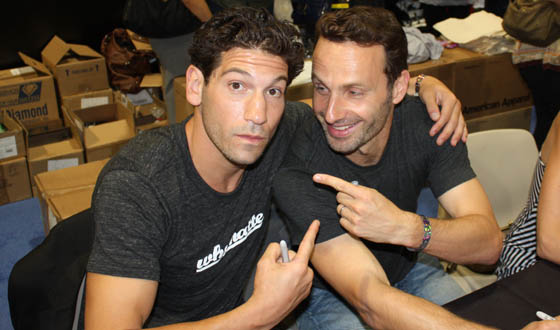 After the autograph session, the cast left the convention center to return to the airport since production on Episode 4 resumes first thing Sat., Jul. 24 in Atlanta. As to Darabont, he remained for the last autograph session — signing legendary poster artist Drew Struzan’s The Walking Dead posters at AMC’s booth. “You have our zombie house!” Darabont exclaimed upon seeing the recreation from his pilot episode. Looking at the back windows that displayed zombie footage from the series, he added, “I feel like we’re under siege here.”

Darabont had seated himself at a table in the middle of the booth with Struzan. “I love this artwork, Drew” Frank enthused as 50 raffle-winning fans lined up to receive their souvenirs. “How cool is it that we’re signing this poster together?” Struzan was equally excited, remarking to Darabont that these “conventions are the only time we get to see each other any more.” The posters signed, the two embraced one last time before Struzan left to attend his own Comic-Con panel. 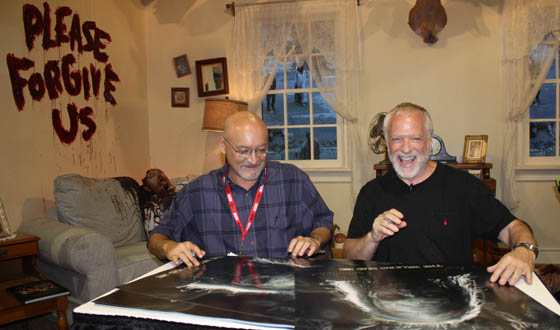