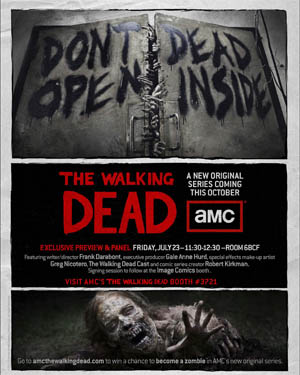 The stars and producers of AMC’s highly-anticipated series The Walking Dead, based on the comic book written by Robert Kirkman and published by Image Comics, will descend on Comic Con 2010 for a panel event and exclusive sneak preview of the original drama.

During the hour-long event, moderator Eric Moro of IGN.com will lead panelists in a discussion about their experience shooting the series in Atlanta, and the process of bringing Kirkman’s comic book to life on the small screen, among other topics, followed by an exclusive first look at The Walking Dead, and a Q&A session with attendees.

The Walking Dead panel will be complemented by a number of on-the-ground activities taking place throughout Comic Con:

• Attendees will have an opportunity to get “zombified” by visiting “The Walking Dead” booth and putting themselves into a zombie scene from the series via a touch screen and AMC will email the photo to them.

• AMC will have The Walking Dead walkers around the convention center and booth.

• The Walking Dead booth will be a semi-recreation of a scene from the pilot episode.

The Walking Dead will premiere this October during AMC Fearfest, the network’s annual blockbuster marathon of thriller and horror films.