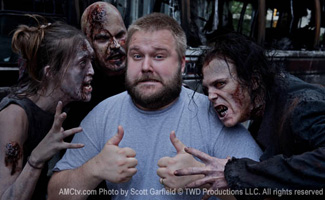 The writer of The Walking Dead chats with USA Today about going Hollywood, while AMCtv.com‘s interview with the show’s special effects makeup designer gets picked up by Digital Spy, UGO and several other media sites.

• FX Channel will broadcast The Walking Dead in the U.K. starting in October, according to Marketing Week.