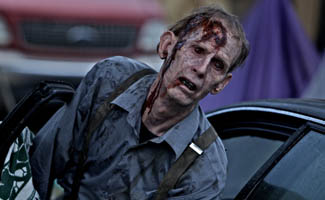 This week, Ain’t it Cool News reports from the set of The Walking Dead, while ScreenCrave touts new production photos and MTV delivers casting news.

• Ain’t It Cool News visits the set of The Walking Dead. “To be frank,” writer Quint says of a particular scene, “this looked f—— terrifying.”

• ScreenCrave points to two new production photos from The Walking Dead set, remarking, “AMC has a grade-A line up of original programming and The Walking Dead should be no different.” 411Mania and MovieWeb also spotlight the images.

• MTV reports that The Blind Side‘s Robert “IronE” Singleton will be joining the cast of The Walking Dead as a character named T-Dog, while DreadCentral notes that Adrian Kali Turner has been cast as Duane Jones.