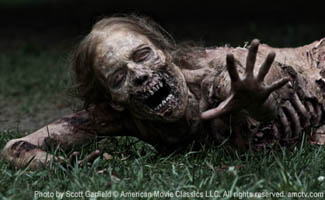 Press outlets this week continue their praise of photos and first-hand dispatches from the set of AMC’s The Walking Dead. A sampling below.

• IGN.com comments on AMC’s release of the first production photo from the series: “I’m guessing it should help quell any concerns fans might have that The Walking Dead zombies wouldn’t be as visceral on TV.” MTV, /Film, Shock Till You Drop, Comic Book Resources and Obsessed With Film also weigh in with praise for the first released production photo.

• io9.com points to AMCtv.com’s “Zombie School” video, remarking, “This is why we’re over-the-moon excited about this series: Because they are taking it seriously.”

• FEARnet and Bloody Disgusting highlight AMCtv.com’s interview with Frank Darabont, particularly the section where he addresses whether the Walkers will run: “Whether they’re in a very languid state or they’re on the attack, they’ll move no faster than that first zombie in Night of the Living Dead.”

• Dread Central reports that genre actor Michael Rooker is joining the cast of The Walking Dead as the character Merle. “And the stellar casting choices keep coming!” the website exclaims.