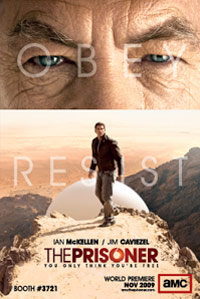 AMCtv.com awards the Talk forum commenters quoted in our “What You’re Saying” posts with prizes like a Prisoner poster, Rover beach ball or Village map (limit one per person).

Commenters this week discussed the significance of 11-12’s number and his plight, and debated the origin of The Village’s mysterious Holes.

“Does anyone else find it interesting that his name is 11-12, as in eleven-twelve, not one thousand one hundred and twelve? Maybe he’s name that because 11-12 isn’t a real number, and he’s not a real person.” — 27

“I really felt drawn to 11-12 and his own story arc, especially when he learns that he doesn’t truly exist. I’ve tried long and hard to think about what that sort of realisation would do to a person and determined that, unpleasant though it was, suicide really seemed to be his only option once his eyes had been ‘opened.’ I was also saddened that he felt killing 909 was necessary. I really wanted to see where their story arc was going.” — 19-72

“I think the black pits are the antithesis of rover (white ball) — this is the manifestation of the weaknesses of The Village, it’s chaotic power is a danger to all — whenever citizens awaken to the truth of the individuals position in relation to the village, pitfalls for its collapse become apparent.” — bluerover6

Got theories about The Prisoner? Log onto the Talk forum to join in any of these conversations or start a Prisoner topic of your own. And don’t forget: Encores of Episodes 3 and 4 air Sunday night at 10PM | 9C.