For Mickey Kirsten, blowing up stunt people and controlling the weather are all in a day’s work. I first met the special effects coordinator last October during The Prisoner shoot in Namibia where I was acting as multi-media producer for AMCtv.com. At the time, Mickey showed me his favorite blood-squirting tricks, the most film-friendly explosives and a few pieces of Special FX paraphernalia. Now that the show is in post-production, we met again in a quiet cafe in Cape Town where he explained (among other things) why traditional effects are often better than CGI.

Q: It amazes me that they still blow up people in movies. Why don’t they use CGI?

A: No way! Water, fire and explosions always look much better if they’re real. Unless a lot of money goes into computer graphics, they just don’t crack it — it looks fake.

Q: I saw some overhead shots of Six walking through the desert with sand blowing in these crazy patterns. Was the camera crew just lucky that day? 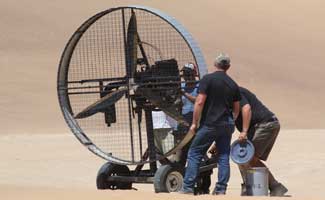 A: We did that for [visual FX supervisor] Ben [Shepherd]; we gave him elemental sand blowing over the dunes. Nothing is by chance. Everything is planned and controlled, even the weather. We used big wind machines for that effect. Ten meters from the blade wind speeds can go up to 80 kilometers per hour.

Q: And the rocks?

A: We make urethane rocks — the rocks are foam or rubber, whatever the case may be.

A: You have to weigh them down carefully and get a happy medium. I get Rob Carlisle from CFX to make them. I use Rob a lot. Those guys really are good. 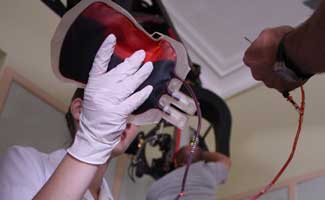 Q: And what about the blood?

A: My partner [Vasili Ringquest] makes the blood…We’ve got a recipe. Let me tell you something, you can buy blood from Hollywood — it’s called “Hollywood Blood” – and if you can see the difference between our blood and theirs… Well, you can’t. You import Hollywood Blood at a phenomenal price. There’s just no way you can tell the difference.

A: Golden syrup. [Golden syrup is a type of sugar syrup popular in South Africa.] There has to be golden syrup. And also some glycerine. Strangely enough, there has to be some blue. We put blue color into it to give it that dark, rich look […] It’s quite interesting: In different light and at different temperatures, blood looks different. So we have to know before we make it what the shooting conditions are going to be. Otherwise, it will look fake.

Q: That’s a lot of preparation.

A: That’s the thing with special effects though. You can work on stuff for hours in the workshop until it looks perfect, but then when you go out there — everything’s different. And it doesn’t matter if you’ve done it ten times in the workshop and it worked great. So you have to learn how to adapt on the spot and make it work on the day. Experienced directors and ADs understand that.

Q: How long have you worked in SFX?

A: Sixteen years. I used to be a commercial diver. And then I got a job to go dive for Max Poolman. He’s like my father. The cleverest man I know. I apprenticed for him. I was with him for eight years.

Q: What advice would you give aspiring SFX artists?

A: Who doesn’t want to get to make toys and then blow them up again? I studied for seven years, but you don’t really have to. I did physics, maths, chemistry, hydraulics, building construction, explosives, etc. But the best thing to do is just apprentice.

Q: What are the job requirements?

A: You must be prepared for long hours, about 16 to 18 hours a day. A lot of guys that come in and try out last for about three or four days and then they’re gone. It’s not like lighting where you come in, set up and then go home. If you’re not in front of the camera, you’re in the workshop building stuff. You have to constantly come up with new ideas. The hours are really tough. And it can be dangerous if it gets out of control. A few of my friends are either dead or have hands that have been blown up or injured in some way. You can’t rush. You can’t panic.