Clinton Smith has been fooling friends and family with gory skin-and-bone special effects since he was a kid. Now as the director of Cosmesis, a Cape Town-based effects company, he has happily settled in the movie industry. In collaboration with his associates at CFX Productions, he created some amazing prosthetics for The Prisoner. Recently, I had the opportunity to ask Clinton about his work — and about a disembodied head, which I saw floating around in a props truck while we were filming.

Q: How did you create the prosthetic head used in The Prisoner?

We didn’t have time to make a sculpt of Jim Caviezel’s real face so we
found a replacement model who matched Jim’s proportions. We molded
their features, created a cast and then poured in a platinum-cured
silicone rubber called Platgel 10. Once the rubber was set, we painted
the skin and then started on the stubble. We pushed individual strands
of dyed yak hair into the jaw and neck area, and then shaved it close
to resemble Jim’s stubble.

Q: And the prosthetic arm? 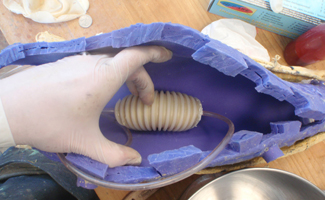 Blood needed to be drawn out of the arm, so it was a slightly more complicated process than the head. We used a model whose arms look like Jim’s and created a rubber mold. Then, inside that mold, we carefully constructed a cartridge of blood and set it inside the arm’s interior. We used a section of swimming pool hose for the blood cartridge housing because it can move, and we painted a thin film of skin around the cartridge so that when the needle pierced the surface and then retracted, the rubber would collapse in on itself just like skin does…

We gave Ruth Wilson a good, clear view of the vein she would have to inject by pumping up the real-life model’s arm so that his veins extruded more than usual. Then we painted the vein over the raised area in the final sculpt. We had to insert each hair individually — yak hair for the coarse hair on the upper side of the arm and softer rabbit hair for the underside arm hair. 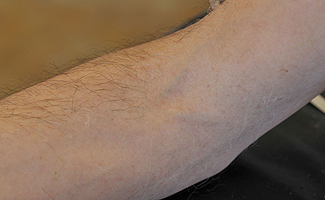 Q: Do you use computers to create 3D digital models?

We didn’t need any 3D models in The Prisoner, but sometimes we do work with the 3D department in pre-production to design the elements that we’ll need to build later. Also, 3D is often used in post to enhance elements of the prosthetic. For the prosthetic head and arm of Jim Caviezel and the arm of Hayley Atwell, we used real-life models whose body features matched the Jim and Hayley.

Q: What human feature is hardest to replicate?

The face is always the most difficult part of the body to replicate. The animatronics involved to create expressions are very complex.

Q: Have you ever used any of your prosthetics as props for a costume party or played any practical jokes with them?

Yes, all the time! I’ve been a vampire and Freddy Krueger for fancy dress parties and lots of other things as well. I’ve been playing around with prosthetics since I was a kid. I remember I gave my dad a scar once. When he got to work, they sent him straight home again! When I was in high school I made myself a fake finger and pretended that I got my finger chopped off in woodwork.