Stunt coordinator Grant Hulley talks about casting Jim Caviezel’s double and the importance of working in tandem with the special effects (FX) team.

Q: What were your responsibilities for The Prisoner?

A: You need try to keep your actors as safe as possible and that’s one of our responsibilities as stunt coordinators on set. We were often working in areas that were high up in the mountains, and the actor had to basically scramble up the rocks. We had to make sure it was going to be safe: If we needed to put up safety lines then we would; if we needed to clear the shale and the rocks so that they didn’t flip, that’s what we had to do as well. We also had a stunt double, who was on full time, so if there was anything, we were there to jump in.

Q: What did your casting process entail?

A: The people that are hired to work with me are stunt people that I’ve worked with before. As a stunt coordinator, that’s probably the most important: Knowing your crew and knowing their limitations so that you don’t push someone past what they’re comfortable with.

Q: How did you know George Bailey was the right guy to serve as Jim Caviezel’s stunt double?

A: I’ve worked with George for many years now, so I know what he’s capable of. He’s also great person to have around. He had to have to right height and body shape.

Q: Did he also have to study how Jim Caviezel moves as an actor?

A: It’s quite an important thing for a double. They need to actually sit and watch what the actor is doing… If he picks up the jacket with his left hand and the actor picks it up with his right, it makes it difficult for us. Just the running; the gait, the way the guy runs — if he’s got long strides, short strides, does he swing his arms, does he have a funny sort of movement in his arms? That type of thing. We need to try to study that and follow that as much as we can. 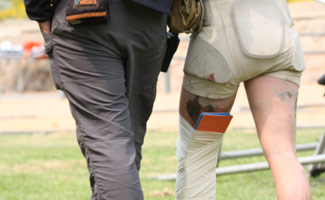 Q: Did you coordinate much with special FX supervisor Mickey Kirsten?

A: Special FX and Stunts had to work closely; our lives are in their hands because they are essentially setting up the explosions. It’s always good — just like with your stunt performers — to know [the special FX team] and know how they work and their safety measures. We had gone through a couple days of rehearsal and prepping. 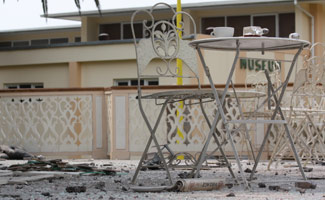 Q: The set has to be prepared?

A: Oh, yes absolutely. The materials that are involved are very important. For example, if it’s a wooden structure and it’s going to be blowing up into pieces, it can’t have nails or screws in it because those are things that even if you’re wearing padding, they could still injure your performers or crew. It’s a huge collaboration between your art department, set designers, welders, special FX guys, stunt guys, and at the end of the day with the director, because he’s the one who has the vision about how he wants it to happen.

Q: Does your company Pyranha Stunts specialize in a particular type of stunt?

A: I wouldn’t say we specialize. Wire work is definitely one of our fortes. Unfortunately in South Africa, because it’s not the biggest industry, you would go hungry if you specialized in only one thing. The stunt guys could never do that. So the guys need to go after as many disciplines as possible.