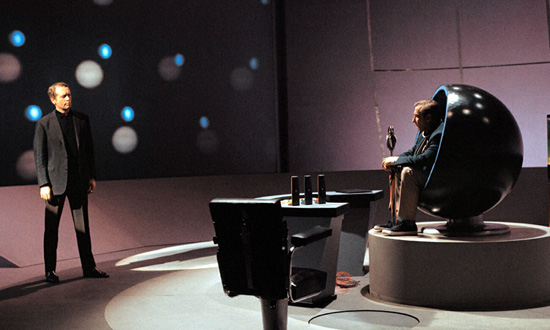 Which episode is your favorite from the 1960s series? Vote in our poll and feel free to tell us your reasons in the comments section below. Here’s a quick recap…

Episode 1: “The Arrival” – After handing in his resignation, No. 6 heads off to his London home to
pack for a holiday. He begins to feel faint and
awakens in The Village.

Episode 2: “The Chimes of Big Ben” – The Prisoner has a new next-door neighbor who tells him that
The Village is situated on the Baltic. They decide to escape.

Episode 3: “A, B & C” –  In an attempt to discover why No. 6 resigned from the Service, the new No. 2 uses a wonder drug to tap into his foil’s subconscious.

Episode 4: “Free for All” – No. 6 participates in the election as the new No. 2 finds out that there’s little freedom of speech.

Episode 5: “The Schizoid Man” – Efforts are made to split No. 6’s personality and make him believe he is someone else.

Episode 6: “The General” – No. 6 must discover the identity of the General and thereby prove that knowledge is not wisdom.

Episode 7: “Many Happy Returns” – No. 6 succeeds in getting back to his London home now inhabited by a Mrs. Buttersworth.

Episode 8: “Dance of the Dead” – Death lurks amid a carnival, and No. 6 is put on trial when he makes an audacious bid to outwit his captors.

Episode 10: “Hammer Into Anvil” – No.6, seeking to avenge the death of a persecuted girl, plays a cat-and-mouse game with No. 2.

Episode 11: “It’s Your Funeral” – No. 6 is tricked into “discovering” an assassination plot. But who is going to be killed?

Episode 12: “A Change of Mind” – No. 6 is the subject of a sinister plan to change his mental processes by sound waves and drugs.

Episode 13: “Do Not Forsake Me Oh My Darling” –  No. 6’s mind and personality are transmitted into another man’s body.

Episode 14: “Living in Harmony” – No. 6 is tricked into becoming the Sheriff. Can he be forced into carrying a gun?

Episode 16: “Once Upon a Time”  – No. 6 faces a ruthless interrogation, taken to the extreme degree.

Episode 17: “Fall Out” – No. 6 comes to the end of his nightmarish adventure.