This browser is supported only in Windows 10 and above.
Story Sync 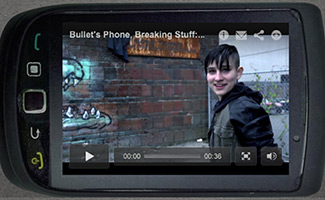 The Killing Story Sync provides fans with a closer look at the characters during the premiere broadcast of each episode. To that end, The Killing Story Sync includes videos shot by Bullet on her smartphone which offers a first-hand look at life on the streets for Bullet, Kallie, Lyric and Twitch. Check out the videos from Bullet’s phone so far.

Pimp Coat
Twitch shows off an earlier addition to his star persona.

Fenced In
Kallie, Bullet and Lyric discuss finding a place to sleep.

Birthday Surprise
Bullet and Kallie plan a surprise for Twitch.

Breaking Stuff
Bullet blows off some steam in a litter-strewn parking lot.

Sew it With Floss
Bullet comes up with a creative way to fix Lyric’s favorite shirt.

The Ritz
Twitch proposes an idea for spending the night in style.